HARM is a vibrant, diverse network that aligns with UCLan’s protean ethos of high-quality research, trans-disciplinary impact and international reach.

This range of guidance materials, funded by Research England, and produced by HARM, raises awareness of HTPs to help organisations address this hidden form of abuse. Divided into three main sections, each with an introduction followed by five recommendations.

Identifies ways to empower people working in, or associated with, an organisation to talk more openly about issues that affect them. We look at workplace champions and other innovative methods to improve communication.

This is followed by a list of 10 practical steps for organisations to take if someone in the workplace discloses that they are a victim or survivor of harmful traditional practices, including honour abuse, forced marriage and female genital mutilation (FGM).

Our recommendations are based on a Rapid Evidence Review of the most up-to-date research, and consultation with a select expert advisory panel who have extensive academic and working knowledge of HTPs. Designed to inform all public, private, and third sector organisations, of any size. This guidance is also helpful for professionals working with vulnerable children and adults.

"Safeguarding is challenging for any organisation. Yet with the right advice, guidance and best practice, you approach you can meet your objectives." 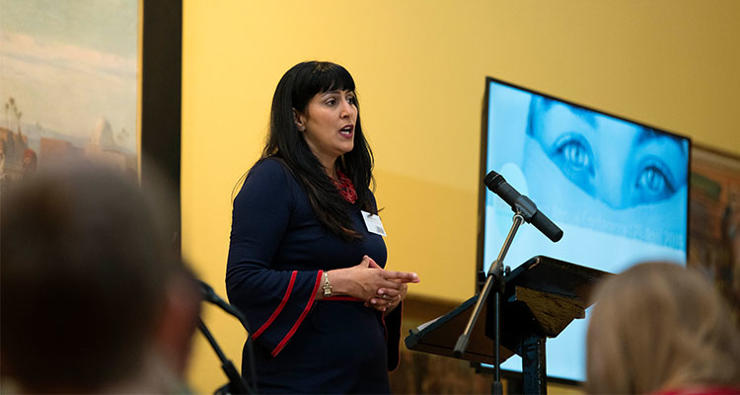 Professor Karl Roberts. Author of Honor-Based Violence: Policing and Prevention. Karl is a Forensic psychologist, Professor and Chair of Policing and Criminal Justice at Western Sydney University, Australia. He is also Adjunct Professor of Pacific Policing at University of the South Pacific, Fiji. Karl’s research explores honour violence. He has published three books on this and advises and trains police and other agencies on these issues.

Matt Mahmood-Ogston. Award-winning LGBTQI+ campaigner, Matt is Director of the Naz and Matt Foundation, dedicated to tackling religious homophobia, setup in memory of his fiancé, Dr Nazim Mahmood, who ended his life two days after his parents confronted him about his sexuality. Matt and Naz’s personal story inspired a ground-breaking storyline in one of Britain’s most watched TV programmes, Coronation Street.

Shaheen Hashmat. Scottish Pakistani writer, campaigner, and survivor of honour abuse, raising awareness in the media and multiple other platforms.

Dr. Lis Bates. Research Fellow, Centre for Gender and Violence Research, School for Policy Studies, Bristol University. Lis’s interests are across gender and violence, in national and international contexts . She is conducting comparative policy analysis of state responses to honour violence across the UK, Norway, Denmark, Finland and Sweden. Previously Head of Research at domestic abuse charity SafeLives, she has held various roles for the UK Parliament and Government.

Dr. Maz Idriss. Senior Lecturer, Manchester Metropolitan University. Maz is also Trustee of the Elm Foundation and LLM Coordinator for Human Rights. His book, Masculinities and Honour Based Violence, co-edited with Professor Abbas Men is a welcome addition to the literature.

Our diverse consortium is made up of local, national, and international members from academia, the police and other emergency services and first-responders, crime scene investigators, legal professionals, government advisors, the Civil Service, NGOs and support organisations, social services and safeguarding professionals, survivors, activists and students.

Dr. John Wainwright- Youth and Justice Lead at the Criminal and Justice Partnership, based in the School of Social Work, Care and Community

Beth Hall (MSc) – HARM special project intern, based in the School of Psychology

HARM works in partnership with other universities, groups, individuals and stakeholder organisations to further the research, support victims, build awareness, and to create sustainable policies and practice guidance based on research evidence. 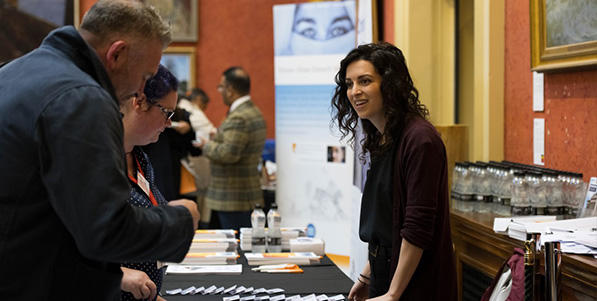 Evidence-based practice and policy offers a more sustainable approach in efforts to eradicate honour based violence, forced marriage and FGM, improving the outcomes for groups at risk.

As an aggression researcher, she maintains a long-standing interest in many aspects of family and community violence and harmful practices.

Nicola is an aggression researcher specialising in intimate partner violence. She also works with offenders with aggression management difficulties and design interventions.

Introduction to the Special Issue on Honour Based Abuse, Violence, and Killings.

‘Honour’ abuse: the experience of South Asians who identify as LGBT in North West England.

HARM is a multi-agency network founded by Dr. Roxanne Khan, in response to this complex problem.

The HARM network is facilitating multiple collaborations, unifying the worlds of research, policy and practice. HARM provides a visible and professional platform to connect various stakeholders working collectively to eradicate all forms of honour abuse.

The core aims of HARM are to develop research evidence to better inform government and social policy to aid front line responses and to share good practice.

We are guided by a core ethos—that professionals hear and respect survivors, and to value them as key stakeholders.

"I think HARM is a really brilliant idea, it is a fantastic project that I'm proud tobe associated with."

An introduction to our network ambassadors can be found in the Members section. We are extremely proud of the work our ambassadors do to further research, drive policy and practice change, build awareness and support victims of honour-based violence and forced marriage. We work closely on numerous projects and initiatives to advance the HARM agenda.

As honour abuse is committed under the guise of cultural or religious practice, it is often unreported or ignored - victims are further isolated and forced to suffer in silence.

Research in this area is limited so it is critical to improve our understanding of how and why this abuse occurs, using robust research to guide policy and practice responses.

The work of HARM members has had a significant and positive impact in the research community and professional practice, leading to individual, organisational, community and social change.

The work of our diverse membership is leading the way in forming a clear multidimensional evidence-based strategy. This is being achieved by connecting esteemed researchers to collaborate on robust research, to investigate on how to improve crime reporting and recording practices, to better support victims, and reduce barriers to help-seeking. We also deliver tailor-made, evidence-based CPD training and a consultancy portfolio, providing education and awareness pro-grammes to empower high risk groups.

Dexter Dias QC opened with a rousing keynote speech to a packed conference at the historic Harris Museum, Preston.

A solution-orientated network of professionals and academics working collectively to combat honour abuse.

The competition is named after British solicitor and former Chief Crown Prosecutor Nazir Afzal OBE who, during a 24 year career, has prosecuted some of the most high profile cases in the country, and led nationally on numerous legal topics including Violence against Women & Girls, child sexual abuse, and honour based violence.

The Nazir Afzal Essay Competition 2020 is now open for your chance to win £500.

The aim of the competition is to encourage quality research and writing on marginalized victimology themes, engage students and key stakeholders internationally in a creative way, and to drive positive societal change.

We encourage entries from students and academics, teachers, professionals, survivors and activists.

"This competition is about encouraging people to think about how we can elimainate harmful traditional practices entirely." 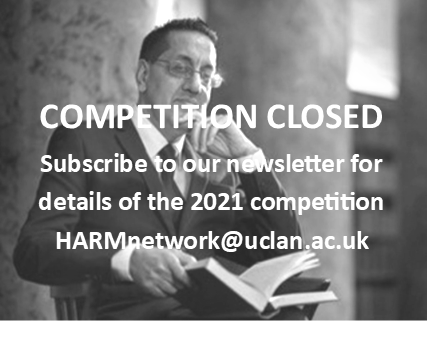 Congratulations to Mariel McKone Leonard on her winning entry:

Not ‘them’, ‘us’: The necessity of recognising ‘harmful traditional practices in all communities

As part of her consultancy portfolio, Dr. Roxanne Khan develops training courses based on the best available current empirical research, survivor consultation, and the expertise and judgement of HARM members working in policy and front-line roles.

This interdisciplinary approach, and increased communication and interaction between the spheres of research, policy, and practice, means that these training courses offer the very best in sustainable, meaningful, continuing professional development CPD.

Scroll or swipe on small screens to see all table columns

We are always happy to work with journalists around the world to share compelling stories about our members’ research and innovations. If you’re a member of the media and would like to talk, please email us at HARMnetwork@uclan.ac.uk

A national study into honour abuse has been recognised for its research impact by a national publisher.

The article, Honour-based violence in a British South Asian community, has been named as one of the winners of the 2019 Emerald Literati Awards for Excellence.

Men are more likely to endorse anti-gay violence than women.

The study on the Journal of Interpersonal Violence by the Honour Abuse Research Matrix (HARM) at the University of Central Lancashire (UCLan), analysed attitudes to violence against the LGBT community. The research focused on five countries: India, Pakistan, Malaysia, Iran and England.

What It's Like To Lose Your Sister in an Honour Killing

"My sister’s death should have been the last of these crimes."

“Policies and preventative strategies are lacking at a national level, and this has had a negative impact on public agency’s awareness and understanding of honour-based abuse,” Dr. Roxanne Khan tells Broadly. “This places victims at risk, especially for those whose cases are more related to organised crime, as in Banaz’s heartbreaking case.”

The former Chief Prosecutor for the North West, Nazir Afzal OBE, has given his backing to a new global network fighting honour-based abuse.

The senior British lawyer was at the launch of the University of Central Lancashire’s (UCLan) Honour Abuse Research Matrix (HARM), which will bring people together to influence policies and develop new strategies in the fight against honour-based abuse, violence, killings and forced marriage.

Dr Roxanne Khan is the director of the Honour Abuse Research Matrix (HARM) Network, a group of academics, front-line professionals, NGOs and policymakers working to tackle the issue. She told Eastern Eye: “The UK government has focused on creating legislation to criminalise forced marriages. While this is a promising start, other forms of abuse more common to BAME women have been unaddressed. “As a result, NGOs and charities have been left to raise the profile of domestic slavery and so-called ‘honour’ abuse.”

Psychologist Khan said many LGBT people experience severe distress, choosing between sexuality and family, especially if they are religious. She said that often leads to depression, loneliness, self-hatred, low self-esteem and suicidal thoughts.

Listen to Director of HARM Network, Dr Roxanne Khan, on BBC Radio talking about our research and the importance of raising awareness about honour crimes | 1hour, 23mins, 50 secs).

Honour-based violence in a British South Asian community, has been named as one of the winners of the 2019 Emerald Literati Awards for Excellence.

If you or someone you know is in immediate danger call 999 and ask for Police.

There are a number of national charities and support organisations you can contact for help. The following offer services ranging from confidential advice and friendly support, to practical assistance and legal guidance.

Refuge and Women’s Aid run a freephone 24 hour helpline for victims of domestic violence, including ‘honour’-based violence or forced marriage. See their website for a comprehensive guide to their services.

Forced Marriage Unit (FMU) operates a public helpline to provide advice and support to victims of forced marriage as well as to professionals dealing with cases. The assistance provided ranges from safety advice, through to helping a forced marriage victim prevent their unwanted spouse moving to the UK (‘reluctant sponsor’ cases). In extreme circumstances the FMU will assist with rescues of victims held against their will overseas.

Karma Nirvana offer confidential help and support for victims and those at risk of honour abuse and forced marriage in the UK. Lines are open 9am – 5pm, Monday to Friday.

Naz and Matt Foundation are a charity who hold regular support group meetings and one-to-one support or mentoring for LGBTQI+ individuals and parents from religious or faith backgrounds .

You can also search for local and national services for victims and those at risk. It is important that you seek advice the moment you suspect something is wrong.