Singing the national anthems: Patrick (14) before the match.

Sports Coaching and Performance student, Patrick McElwee, made his first appearance for Gibraltar under-21s in their match at the Ammochostos Stadium in Larnaca, Cyprus, where they narrowly lost 1-0 in the Group 7 match.

Patrick, who normally plays centre-back for UCLan, was asked to play left-back for his country, in an unfamiliarly role, “I’d have played anywhere I was asked but left-back isn’t my natural position and I’ve not played there much in the past but I feel I did well when I was on the pitch.  One of the players I was up against is currently at Tottenham Hotspur, in their under-23 squad.”

Being based in Preston and playing for UCLan means that Patrick has had to work harder to be noticed by the Gibraltar management team, that don’t have the resources that a lot of other UEFA nations have.

“It all started last year when I e-mailed the under-21 coach and asked if I could train with the team.  He agreed and it gave me a good insight into the standards required.  I wasn’t selected last year but I was then invited to the training camp for this game in January.

“Leading up to the training camp I was training 6 days a week at the Sports Centre and the Sports Arena to get myself as fit as possible.  I flew over to Gibraltar for the training camp which included 40 or so other players, many of which were playing for clubs in Gibraltar.  The sessions were intense as we all aimed to impress the manager.  I was delighted to then be selected for the squad to travel to Cyprus.

“At the second training session in Cyprus the manager asked me how I felt about playing left-back and asked me to play there in training.  I must have done okay because I was selected to start the match.

“The match went well and gives us confidence that we can complete at this level.  We believe we can get something from our home matches.” 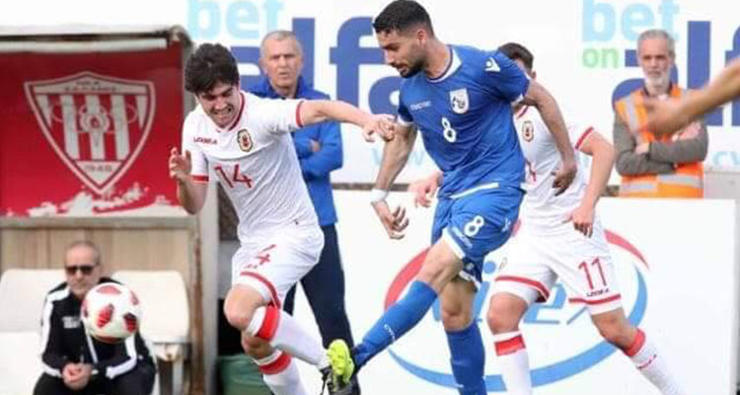 Patrick (14) up against Michalis Charalambous of APOEL (on loan at Varzim S.C.) 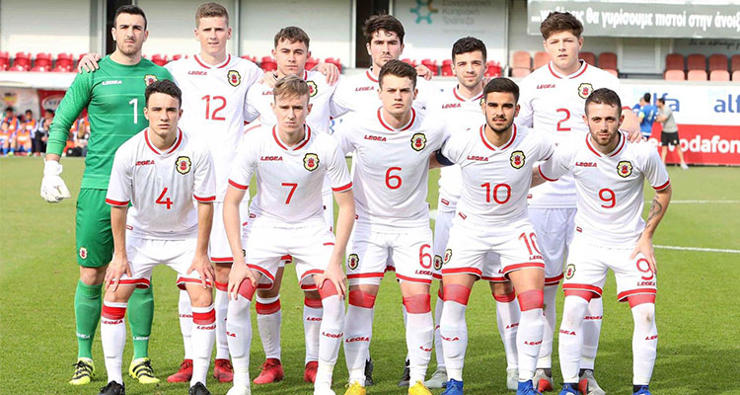 The team pose for a photo before the match

The other teams in Group 7 are Belarus, Netherland, Norway and Portugal with the next match against Belarus in Gibraltar in June.  The tournament will be co-hosted by Hungary and Slovenia in 13–27 June 2021.

Gibraltar only started playing in UEFA competitions in 2014 and are the second smallest UEFA nation with a population of just over 33,000 – around quarter of the population of Preston!  Preston is home to a growing population of Gibraltarians.  Patrick commented, “I live with four other Gibraltarians, and there are four more next door and another one in the flat above.  We are all friends from school.

“I came to an Open Day and really liked the city and how close the campus was the city centre without it feeling like it was a big city – there is a good vibe in Preston.  After I decided I was coming here I noticed a lot of my friends in college were also coming here so that was great.”

Included in this group are other players that have represented Gibraltar at various levels.  Daniel Sanchez studies Sports Science, Liam Thorne studies Business and Management and Karl Poggio is on the Fire and Leadership Studies course.  Former UCLan student Alain Pons is currently in the Gibraltar first team and has played against the likes of Belgium and Rep. of Ireland.

Patrick comes from a strong footballing background. His father, Mick McElwee, won 6 titles in a row with Lincoln Red Imps as a player before winning 10 more in succession as a manager, which included an 88 match unbeaten run of league matches between April 2009 and September 2014.  Mick was the assistant manager when the part-time side beat the mighty Glasgow Celtic in Brendan Rodgers first game in charge of the club in July 2016.

Patrick currently works at Preston North End as a Youth Analyst as part of his Sports Coaching course.  After graduating, Patrick would like to study Sports Psychology at master’s level and has a goal to work as a mind coach in professional sport.