Our award-winning Animation degree course covers stop motion, 2D animation and 3D digital animation. These techniques will help you develop the practical skills and technical expertise you need to create your own film by the end of the course.

Our lecturers are practising professionals and you'll have access to fantastic animation facilities. Catering for CGI, stop frame, 2D, illustrative, set building and model-making. As well as sound recording, editing and sound design. All supported with the latest animation software, including Toon Boom and Dragonframe.

Why study with us 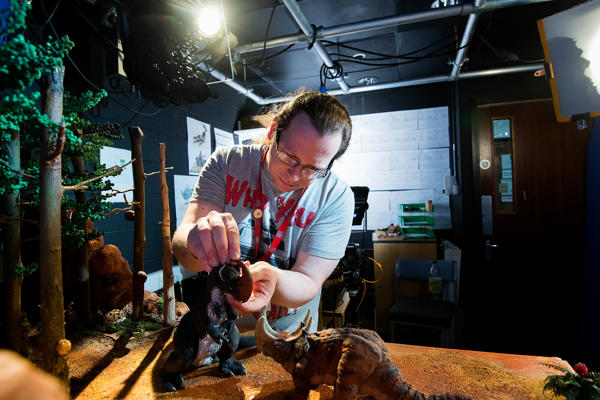 Discover the award-winning creative work produced by our undergraduate Animation students. The degree show features work in a range of mediums by students from the School of Arts & Media.

This course is taught face-to-face at one of our UK campuses.

Every effort has been made to ensure the accuracy of our published course information. However, our programmes are subject to ongoing review and development. Changing circumstances may cause alteration to, or the cancellation of, courses. Changes may be necessary to comply with the requirements of accrediting bodies or revisions to subject benchmarks statements. As well as to keep courses updated and contemporary, or as a result of student feedback. We reserve the right to make variations if we consider such action to be necessary or in the best interests of students.

Whether you already have your results, or you're thinking about returning to study, register your interest for Clearing and we can help find the course for you.

Register your interest for Clearing

Animation is a flourishing industry due to recent government support. And thanks to the University’s proximity to MediaCityUK, there’s no better place to study animation.

Our graduates enjoy careers as animators, model-makers, editors, directors, scriptwriters, set designers, and sound designers. They've gone on to work at companies such as Nintendo, The Factory, McKinnon and Saunders, Sony Pictures, TT Games, Soccer Manager, the BBC and many others.

Graduate Charlotte Blacker won the RTS award for the best undergraduate film in the country. She has since worked for Loose Moose and now is teaching our course at Hebei University, China. Her graduation film The Little Red Plane has been shown at various film festivals, including The Children’s Festival in New York. She is much in demand in the USA for series work and short animated films.

As part of your course, there may be additional optional costs to consider that are not included within your tuition fees. You can find out more by following the links below:

As part of your course, there may be additional optional costs to consider that are not included within your tuition fees. You can find out more by following the links below:

We have a wide range of scholarships, bursaries and funds available to help support you whilst studying with us.

Select your country and see eligibility information and how to apply by selecting more info on the cards below.

A three-year degree qualification typically comprises 360 credits. Every 20 credits (a standard module) equates to 200 hours of study. Which includes a mix of lectures, seminars, tutorials, practical sessions and independent study. Independent study is an important aspect of your degree course. The exact combination of study time will be detailed within your module descriptors and will depend on your option choices.

Teaching is delivered through a combination of lectures, seminars, tutorials. As well as student-centred practice within the workshops and filming facility. Staff contact time is 10 hours per week per double module, and you may access facilities from 8.00am to 8.00pm daily.

Assessment is 100% coursework. including group work and formative assessment. Modules culminate in a final assessment during which all your work will be presented.

Our animation course is closely aligned with industry demand and recognises the gaps within the sector. The course is designed to help you move forward into the entertainment and media industry. We'll work together with studios and professionals to gain opportunities to kick-start your career.

You’ll have the opportunity to work on individual and group briefs for real companies. These projects often result in work placements and full-time roles.

Speakers who have visited the course include:

For information on possible changes to course information, see our Essential and Important Course Information