UCLan Fine Art graduate, Ellis McKeown, has landed a newly created position of Social Media Executive at Eleven Sports Media, where he heads up all things social, whilst continuing to study at UCLan on the Masters in Digital Marketing Communications.

In his role, Ellis is responsible for planning and developing engaging, creative and branded content for daily scheduled posts, working alongside prestigious brands and Premier League, EFL Championship and Scottish Premiership football clubs in order to engage and inspire audiences. Ellis also produces live and non-match day content to keep social media accounts up-to-date and relevant to what is going on at each football club.

Ellis chose to study Fine Art at UCLan as he “enjoyed studying art at A-Level” so initially wanted to study graphic design. However, after attending a University open day, he realised he wanted to do something that “gave you room to explore and experiment”. It was only after a second visit to UCLan that Ellis decided to choose the Fine Art course.

Ellis missed his scheduled graduation ceremony as he got the opportunity to work in America straight after completing his course. He said: “The day after my Degree Show in June I flew out to America to spend my fourth consecutive summer working at an American summer camp in Massachusetts. Due to the nature of my final year project, I became interested in transferring my creative skills into a different sector that was digital based. This led me to applying for the social media internships that UCLan offered, where I was successful and started a month later after finally attending my graduation ceremony later that year.”

Ellis stayed at UCLan for another year to complete his internship where he worked as a Social Media, Digital and PR Assistant in the Marketing Department, working specifically on social media accounts within the Faculty of Culture and Creative Industries.

When asked about what led to this interest in social media marketing, Ellis said: “During my final year University project, I would regularly work with software such as Photoshop and Final Cut in order to edit photographs and videos that would form part of my Degree Show exhibition. The freedom within the fine art course was really appealing to me as I liked to explore new ways to be creative, finding that the best way for me was to go digital with my work.”

This experience ultimately led to Ellis gaining his current role at Eleven Sports Media as well as the decision to undertake the online Masters in Digital Marketing Communications at UCLan. Ellis said: “The online course allows me to work full-time as well as study. I am currently enjoying the balance and hope it gives me the ability to apply new skills to my job role.” 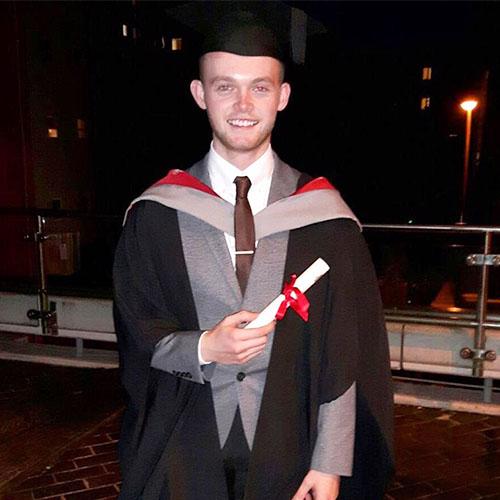 When asked about his greatest achievement to date, Ellis talks about the years he has spent working at Crane Lake Camp, a summer camp in America: “Completing my fourth summer at an American summer camp has to be my greatest achievement. I worked my way up to becoming an area leader in Outdoor Education in the four years, meeting amazing people, making unforgettable memories and travelling to some wonderful places across America.”

Ellis’ advice to anyone wanting to do something similar is simple: “Do something that you enjoy. I really enjoyed doing art, with a countless number of people always asking what I am going to get from that, job wise. It is what you make of it that counts, apply your skills in many ways, get experience any way you can, and just put yourself out there, you never know what could happen.

“The feel at UCLan has always been friendly and welcoming, and I believe this added to my time at University. It has taught me that you can do anything if you put the effort in; all you have to do is believe in yourself.”

Talking about his time as a student, Ellis tells us his lasting memories. “My lasting memories of UCLan has to be the people I have met, both on and off my course. Having lived with the same people for all three years and still being in contact just shows what an amazing experience you can have at university and how it can have a huge impact on your life.”