The University of Central Lancashire historians work on labour and people’s history, covering a wide range of topics in Britain and Ireland.

We have longstanding links with the region’s museums, libraries and archives as well with as local groups. Many of our students do successful dissertations, projects and placements in this area.

Current work includes the early nineteenth-century pro-democracy movement and the ‘Peterloo Massacre’; the history of the Labour party, particularly social democracy, social liberalism and the roots of ‘new Labour’; the co-operative movement; co-operative business models, particularly the John Lewis Partnership; the Labour movement and the First World War; modern Irish history, particularly labour, nationalism and the Irish community in Scotland; and the commemoration of the second world war and the holocaust.

Research in social history includes the history of higher education and technical education; the temperance (or ‘teetotal’) movement; 19th- and 20th-century periodicals; crime and society; and the social history of deafness. Research students are currently working on the history of the Poor Law, the family, the Church of England, the Home Office disturbances papers, the Band of Hope, and northern film and identity.

In 2014-16, Nick Mansfield works for the AHRC-funded First World War Centenary Engagement Centre. He co-organised the conference on ‘The First World War: Commemoration and Memory’ at the Imperial War Museum North' on 26 February 2016.

Robert Poole led a workshop at the National Archives on ‘The Peterloo Massacre: Protest and Democracy in Regency England’ on 31 March 2016.

Caroline Sharples co-organised a series of schools workshops around Holocaust Memorial Day 2016, as part of a collaborative project Across the Seasons: Memory Matters Today.

A one-day symposium on ‘Britain and the Easter Rising’ was held at the University of Central Lancashire on Friday 9 Sept 2016, it brought together new and leading historians on British responses to the Rising and its consequences against the backdrop of the First World War. Convener: Dr Máirtín Ó Catháin, with the support of the AHRC First World War Co-ordinating Centre at the University of Hertfordshire.

In 2016, Dr Robert Poole was interviewed by Melvin Bragg on the BBC Radio 4 show ‘The Matter of the North’ exploring the radical movements that sprang from the North.

Clare Copley is a Lecturer in Modern European History in her current research Clare uses post-unification responses to the built legacies of National Socialism and the Cold War to explore contested memory and governmentality in Germany. In particular, she is interested in memorialisation and the development of the memorial landscape, attempts to 're-encode' historically 'burdened' buildings and the interplay between power, memory politics and the built environment.

Andrew Hobbs is a Senior Lecturer and Course Leader for BA International Journalism, his current research includes Victorian ‘citizen journalists’, poetry and historical writing in the 19th-century local press, and the history of the 20th-century county magazine. He is working on a scholarly edition of the only known diaries of a Victorian provincial journalist, Anthony Hewitson of Preston. Andrew worked with a playwright and actor to adapt the diaries into a one-man play, and he is keen on further creative collaborations based on his research.

Nick Mansfield is a Senior Research Fellow in History he is currently writing a 2 volume book for Liverpool University Press on work, class, politics and the nineteenth-century British military, focusing on soldiers as workers retaining working-class activities, resistance and culture. The first volume Soldiers as Workers – class, employment, conflict and the nineteenth-century military, will be published early in 2016.

Stephen Meredith's current research project examines the ‘progressive’ dimensions of Conservative intellectual and political responses to the ‘decline’ and ‘crisis’ of the post-war British state. He is preparing a monograph entitled, From the Big State to the 'Big Society': 'Progressive' Conservatism, Thatcherism and the State, 1964-79. The project explores the shifting context and relationships of Conservative intellectual and political ideas at a critical juncture in attitudes and approaches to the standard form and management of the British state. In so doing, it seeks to explain the wider and diverse intellectual context and relationships in which ‘Thatcherism’ evolved and emerged and the more diverse roots and influences of the ideas and policies of Thatcher’s Conservative Party in opposition and early government.

Mairtin O'Caithin is a Lecturer in History, Mairtin is currently working on a chapter about the Derry/Londonderry and the British Labour Party for a forthcoming book on the British Labour Party and Ireland. He is also working on an oral history article on a former member of the Glasgow unit of the IRA. Other ongoing research relates to Lancastrians serving with British forces during the 1798 rebellion, the Glasgow University Irish Nationalist Club, 1906-21, and the possibilities for genealogy to be used as a tool for reconciliation in Northern Ireland. In addition, he has worked on aspects of social, labour and radical history, as well as women’s history, and has researched aspects of witchcraft and infanticide cases.

David Orr is a Senior Lecturer, following the completion of his master's at Edge Hill in 1999, Dave set up the online Hillsborough disaster archive for the Centre for Studies in Crime and Social Justice and worked on the ESRC funded national Violence Project with the historian Dr John Archer. Dave’s own research has largely been historical, class-based analysis of the prison system and criminal justice in the nineteenth-century England and Wales. Dave has written on children, sexuality, ‘mental illness’ and criminal justice in early nineteenth-century London, Sex trafficking and corporate crime, and is a member of the European Group for the Study of Deviance and Social Control.

Robert Poole is a Guild Research Fellow, during 2013-14, Robert is working on a British Academy/Leverhulme funded pilot project 'The English reform movement of 1816-17: understanding the Home Office disturbances papers', with Dr Katrina Navickas of the University of Hertfordshire. The longer-term aim is to digitise, catalogue and make available the whole of this material, which is the single most important resource for the study of popular protest in the industrial revolution period. He has published articles in 'Past and Present', 'History' and 'Labour History Review', and is editor of the 2013 Manchester Region History Review entitled 'Return to Peterloo'. He is working on a book on the 1819 Peterloo Massacre and a biography of the radical Samuel Bamford, whose diaries he co-edited with Martin Hewitt. He has appeared on the BBC series 'Elegance and Decadence - the Age of the Regency' (2011) and the ITV series 'How They Built the North' (2013) and was a consultant to the Library Theatre Company's 2013 production 'Manchester Sound - the Massacre'. He will be leading workshops and lecturing on Shelley's Peterloo poem 'The Masque of Anarchy' at the Manchester Histories Festival in March 2014.

Dr Jack Southern is a historian working in several areas of history and heritage. His research primarily examines communities linked to the Lancashire cotton industry. More widely, he is interested in the expressions of local and regional identity.

David Stewart specialises in modern British political and economic history, with particular reference to the history of Thatcherism, the British Labour Party and the consumer co-operative movement. David’s monograph, The Path to Devolution and Change: A Political History of Scotland under Margaret Thatcher (I.B. Tauris), which analysed the ways in which Margaret Thatcher’s economic and social restructuring influenced attitudes towards constitutional change and the Anglo-Scottish Union in Scotland, has been described as ‘an admirable work of scholarship that represents a very good synthesis of an impressive range and depth of material’.

Geoff Timmins' main academic interests are in local and regional history, especially in relation to industrialisation and the use of the built environment as a source of historical evidence. He is also involved in research related to history teaching and learning, He has published extensively from his research findings and has given numerous conference papers relating to them, both in Britain and in overseas countries, including the USA, Canada and Australia.

Keith Vernon research continues in three, inter-related areas. His main focus is continuing work on the history of higher education in Britain in the late nineteenth and early twentieth centuries, looking especially at the development of the civic universities and their relationships with their local communities, and the emergence of research in the University. He has a growing interest in the history of education in the co-operative movement in the late nineteenth and early twentieth century, looking especially at the vocational training of co-op employees. More recently, he has been looking at the public history of the Preston Guild in the twentieth century. The Preston Guild is an important and historic local festival with interesting implications for how traditions evolve and engage with new communities and generations over the century.

Annemarie McAllister carries out a range of interdisciplinary academic and public engagement work in her current role as a part-time Senior Research Fellow. She is a leading writer on various aspects of temperance history, drawing over 40 years’ study and teaching of representation as well as research in archives throughout the UK and the US. She also has a particular interest in the study of periodicals, both as a field and as sources, magic lantern slides and shows, and has also written on the uses of songs and public spaces, as well as more general temperance history. Public history and wider engagement with heritage is a central aspect of her work, seen in her curation of exhibitions and many public talks, debates, and re-creation performances. This has led to media appearances as well as links with third-sector organisations currently working on alcohol-related issues. 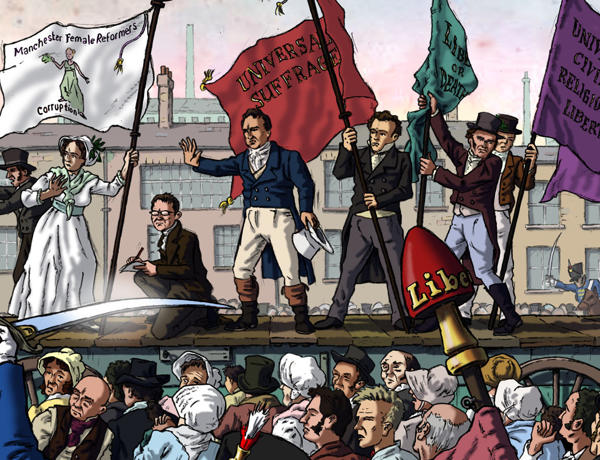 2019 saw the bicentenary of the ‘Peterloo massacre', a formative event in the history of British democracy when a mass rally for parliamentary reform in Manchester on 16 August 1819 was attacked by armed cavalry with hundreds of casualties. 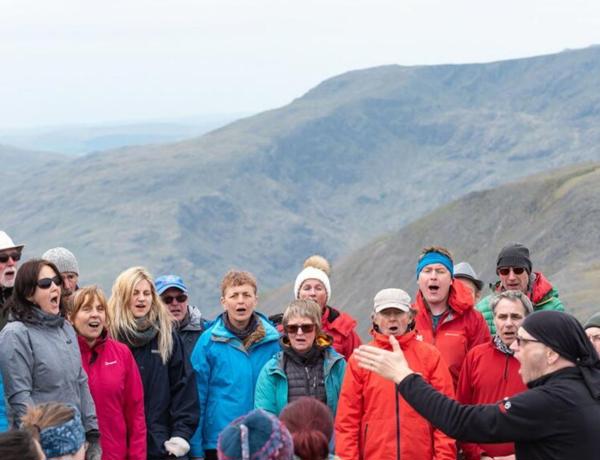 The great gift of freedom: working with the National Trust and the mountaineering community to understand, interpret and...

Dr Jonathan Westaway’s research on the donation of mountain summits as war memorials has had a significant impact on the policy and practices of the National Trust (NT) in the Lake District.