Health and family issues are no barrier for new physician associate

A student who overcame health complications, a family bereavement as well issues surrounding her mother’s illness has graduated from the University of Central Lancashire (UCLan).

Shelbi Hurst suffers with recurring pancreatitis, lost her young cousin suddenly and her mum has cardiovascular issues, but despite all this she is among UCLan’s first cohort of physician associates.

She said: “There were times when I felt like there wasn’t going be an end to all this stress and when I was ill myself, I’d think ‘have I missed too much? Am I going to be able to catch up?’ but I don’t think I ever reached a point as such where I wanted to give up completely.”

After a horse trampled on her during a riding accident when she was 18, the damage to her pancreas left Shelbi suffering from recurring pancreatitis. She was admitted to hospital the week before her graduation with another bout of the illness but recovered in time.

Tragedy struck Shelbi’s family when her young cousin died suddenly at just two-years-old. She said: “It was such a sad time for the family, and it took a while for me to get my head around the fact someone so young could be taken so quickly.”

"The first 16 weeks of the course were really intense and I wondered if I was doing the right thing but it was definitely worth it."

Shelbi’s mother, Sonia, has also been in and out of hospital due to cardiovascular problems, sometimes spending months there before being discharged.

Despite all these struggles, the 25-year-old from Bolton was awarded a distinction in her postgraduate diploma and was also the first recipient of the Olu Orugun Award – an prize founded in honour Professor Olu Orugun, who worked at West Cumberland Hospital and passed away in August 2017.

Shelbi, who was battling pneumonia while preparing for the exams, said: “I consider myself very fortunate for getting the chance to work with him as part of my course at West Cumberland Hospital and am very proud to be the first recipient of such a special award.”

She has worked part-time at her local GP in her hometown of Bolton since completing her MSc Cardiovascular Health. It was the principal GP there who informed her about UCLan’s new physician associate course. She said: “The first 16 weeks of the course were really intense and I wondered if I was doing the right thing but it was definitely worth it.” 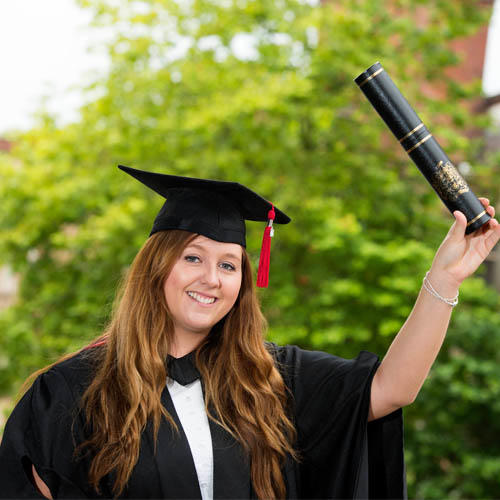 "Ever since I’ve been at University, there’s been something all the time that’s been testing me which is why I’m really proud to have finished Uni now and am going into employment."

It was her family’s history of heart problems which inspired Shelbi to study on the MSc Cardiovascular Health after completing a BSc (Hons) Biomedical Science at UCLan. She came back to UCLan for her postgraduate diploma after deciding she would like to further her education of the rest of the body.

Shelbi now works at Royal Blackburn Hospital doing acute medicine Monday to Thursday but runs a clinic at her local GP surgery in Bolton every Friday. She hopes to stay in touch with her lecturers at UCLan and come back to supervise and one day teach the future cohorts.

She added: “Ever since I’ve been at University, there’s been something all the time that’s been testing me which is why I’m really proud to have finished Uni now and am going into employment.”

The postgraduate physician associate course is supported by funding from Health Education England.