A harvest to reduce zinc and iron deficiencies in people

It is said that inside every seed is the potential for an incredible harvest and this literally happened to the wheat crop seeds Zincol-2016 for the BiZiFED2 project. The seeds sown between October and November 2019 are now undergoing the spring harvest. What makes this Zincol-2016 harvest from the BiZIFED2 project much more special is the fact that it has potential to help people with micronutrient deficiencies around the world. In this blog, we are bringing news of the harvest, and a further update on how COVID-19 is impacting our community. 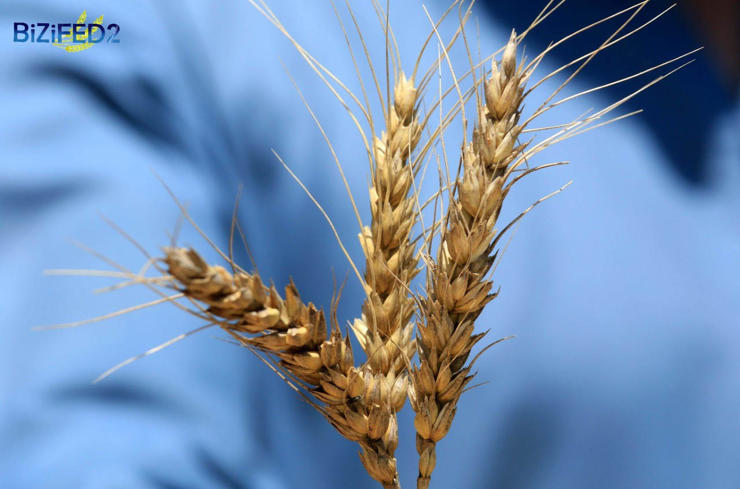 Zinc and iron are two important micronutrients that are essential for humans, but their deficiencies are widespread affecting billions of people across the world, and often co-exist. A lack of zinc and iron in the diet has consequences for health, for example increased susceptibility to infections, early onset of fatigue, and may adversely affect growth and development in children.

We are working on a way to increase the amount of zinc and iron in the diet through a technique called “biofortification”. The crop that we are harvesting in our research is biofortified, which means it was provided with a zinc rich fertilizer during the growing season.  In addition, it has been selected as a variety that has enhanced capacity to transport zinc into the grain.  This combination has the potential to double the amount of zinc, and iron (as a fortunate by-product), in flour made from this biofortified grain, thus providing a cost-effective and sustainable way to raise the amount of zinc and iron in the local diet.

Forty farmers that are small landholders (with a combined growing area of about 100 hectares) from a region close to the Peshawar district in north west Pakistan were involved in growing Zincol-2016 with support from our collaborative organisation Fauji Fertilizer Company (FFC). After testing soil samples, each farmer was given required amounts of Zincol-2016 seeds and fertilizers to apply to the soil and leaves to optimise the zinc supply to the plant. The farmers were advised from time to time on the standard practices to be followed. The grains were sown between mid-October and mid-November 2019. A national emergency due to threat from locust attack was declared in Pakistan during this period. Fortunately, the locust swarms did not affect the area, but there was a short delay in the timing of zinc spray because of the wind and unprecedented heavy rains. We saw this as an advantage since in the ‘real world’ scenario such situations are bound to happen. This will add to our understanding of whether the biofortification has been able to enhance iron and zinc contents in the grain despite such unforeseen circumstances. We are optimistic that this minor deviation from the research plan has not had much effect on the micronutrient levels of the grain. 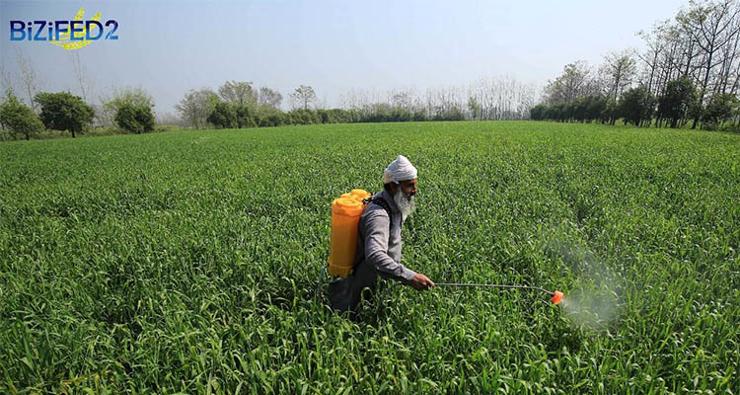 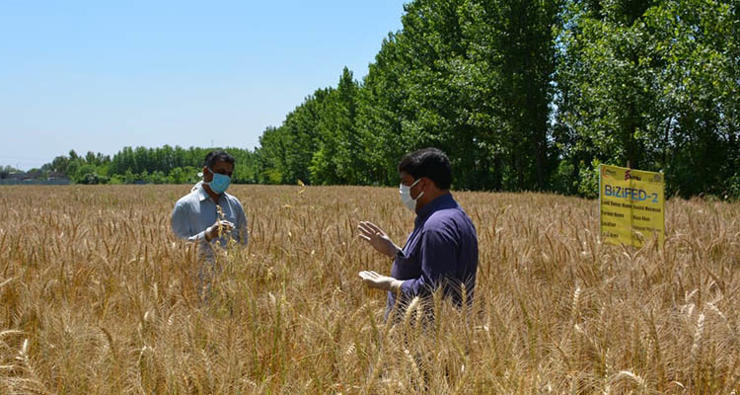 Agronomists assessing the maturity of the biofortified wheat crop 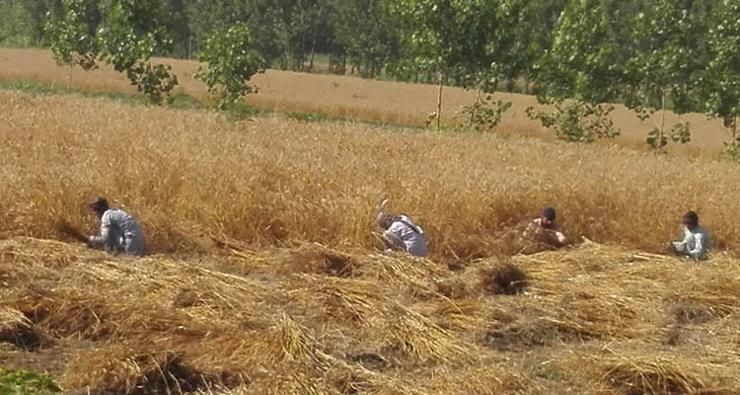 In the month of April 2019, crops were assessed by agronomists to find out when would it be ready for harvesting.

At present, this biofortified crop is being reaped, thrashed, winnowed and packed in the grain bags for storing. We are very much looking forward to getting the grain tested for its mineral content. These grains will then be milled into flour which will be distributed to the families of enrolled participants of the Randomised Control Trial (RCT) by our implementing partners in Pakistan.

This week we are hearing the news that the COVID-19 wave in Pakistan is intensifying.  There have been a small number of reported cases in our partner communities, and the situation is changing rapidly. In our last blog, we reported that our research has been suspended, but we are continuing to provide non-biofortified flour free of cost while the trial is on hold as we care for the community and would like to help the community to the best of our capacity in this crisis.   Our implementation partner, Abaseen Foundation UK (a UK registered charity), is distributing food parcels to the community to help households whose income has been hardest hit. We don’t know how long we will have to wait until we can resume our research, but when we do, we will enter the second phase of the trial. In this phase the participating households will be randomly assigned to either an intervention group receiving locally grown biofortified flour or to a control group provided non-biofortified flour for the next six months. We had also arranged visits for willing community residents to the farms while the biofortified crop was growing to show them that the local farmers were involved in the process. We believe that this will instil confidence in the community towards the project and acceptance of the flour during the second phase of the RCT.

We hope that our ‘harvest’ helps to establish the biofortification of crops as a sustainable and cost-effective solution to the alleviation of iron and zinc deficiencies. 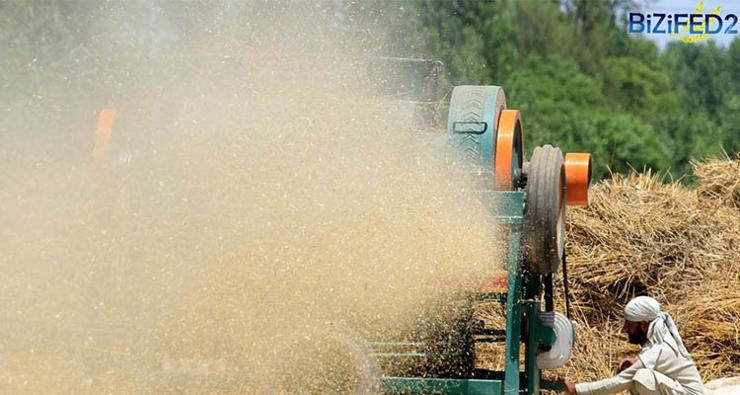 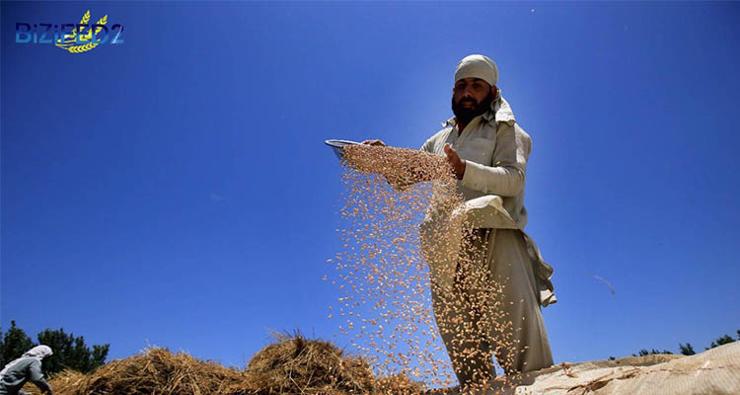 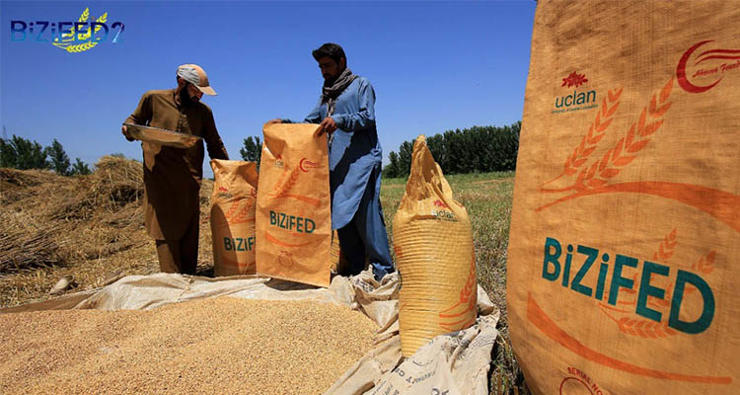 BiZiFED2 is the first large scale investigation into the potential of biofortified wheat produced through conventional and agronomic biofortification to reduce zinc and iron deficiencies. This study is led by Professor Nicola Lowe from the University of Central Lancashire, in collaboration with the Abaseen Foundation, Khyber Medical University, University of Nottingham, London School of Hygiene & Tropical Medicine, Kings College London and British Geological Survey. The project is funded by UK Research and Innovation (UKRI), through the Global Challenges Research Fund (GCRF), awarded by the Biotechnology and Biological Sciences Research Council (BBSRC).