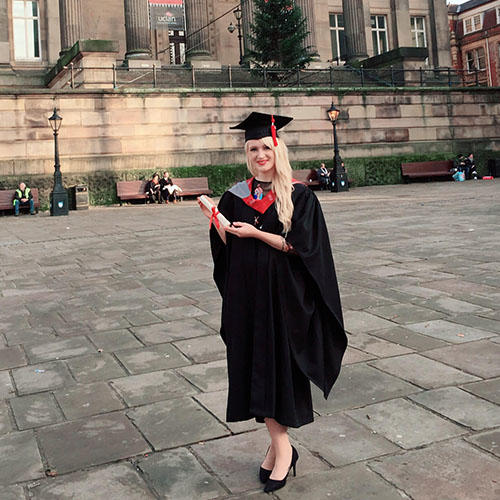 After gaining a first-class degree in International Hospitality Management from UCLan in 2017, Kelly-Marie Staunton has landed an exciting role as Guest Relations Manager at the iconic Midland Hotel in Manchester. This comes after an exciting year working as a Front Office Supervisor at the Hilton Westminster London and as a Guest Relations Executive at the five star London Marriott Grosvenor.

Whilst studying, Kelly worked seven days a week as a supervisor at The Daffodil Hotel and Spa in Ambleside, an executive lounge host at the Hilton Hotel on Manchester’s Deansgate and a front desk agent at Blackpool’s Hilton Hotel simultaneously. Kelly always knew that working in hospitality and hotels was her career of choice.

In her final year of study, Kelly worked on placement in Nashville, in the United States of America. Kelly-Marie said: “I really enjoyed my year abroad and was interested to see how hospitality was conducted over there.” She then won a place on the prestigious Marriott Graduate Voyage programme, which saw her travel to China immediately after Graduation to work as Trainee Manager at the Marriott in Guangzhou, China.

Kelly-Marie’s hard work and determination was recognised after she won a number of hospitality awards. She was presented with the Marriott Hospitality Prize 2017 and claimed three Student Employee of the Year awards at institution, regional and national level. Kelly has also since completed the LLM in International Business Law, here at UCLan, and she’s currently working on a research project regarding the importance of expats and how they benefit the company, Marriott International. Kelly has also recently become a member of the Institute of Hospitality and won their Aspiring Manager Award 2019, which recognises rising stars across the hospitality industry.

Speaking about her time at UCLan, Kelly said: “My degree has grown my confidence to interact with various people, and other cultures from the across the world. It has also challenged my abilities to pursue further education, and to work internationally.”