Austin realised he wanted to be a race engineer when he spoke to some engineers that worked for British Touring Cars when they visited his hometown in Iceland in 2005. This passion for motorsport inspired Austin to study BEng (Hons) Motorsport Engineering at the University of Central Lancashire.

Reflecting on his degree choice, Austin said: “This was the course that allowed me to work in an industry that I have a passion for.” After his first year of study, Austin decided to switch from full-time study to part-time so that he could work extensively in the industry and study at the same time.

During his degree, Austin worked on various championships including World Series by Renault 3.5, Super League Formula and Formula Renault Europe 2.0. At one point, Austin was working on 25 Race events during the season and between 10 and 15 test events a year.

He said: “This made for a busy calendar which required a lot of work to maintain a high quality of course work. It was not for the faint of heart but well worth it when I graduated with a first-class degree and secured full-time employment before I graduated.” 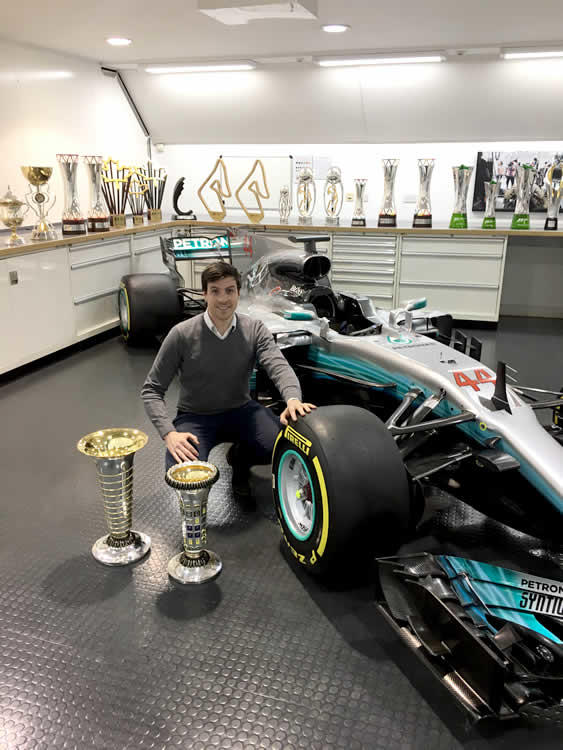 After graduation, Austin worked as a Race Engineer with Arden International where he took two Driver Championships with Mitch Evans and Daniil Kyvat. He then progressed to becoming a Performance Engineer in the GP2 series. After three years, Austin moved to work at Mercedes AMG PETRONAS Formula 1 Team as a Powertrain Dyno Test Engineer. In recent years, Austin moved roles within Formula 1 to become a Senior Performance and Simulation Engineer in the Vehicle Dynamics and Performance Group.

When asked about his greatest achievement since graduation, Austin said: “Becoming a six-times world champion with Mercedes F1 and working through a new age of F1 dominance. Along the way I had the pleasure of working with some of the best drivers in the world both in F1 and on their path to F1; Lewis Hamilton, Nico Rosberg, Valtteri Bottas, Daniil Kyvat, Carlos Sainz, Stoffel Vandoorne, Enrique Bernoldi and Giorgio Pantano.”

When asked about advice he would give to prospective students wanting to study motorsports, Austin said: “If you have a passion for motorsport and want to work hard to work in the industry then go for it. It is one of the most competitive industries to try and work in so be prepared to go the extra mile at every junction. You will need to set yourself apart from the competition. If possible, work / volunteer in the industry during your studies but not at the cost of your results.

He continued: “One aspect of my studies that has opened a lot of doors was choosing an industry relevant dissertation topic as it is always a primary talking point in interviews.”