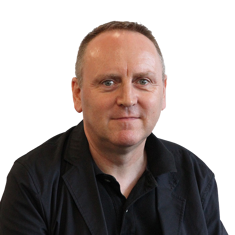 Mike teaches across a broad range of modules in the field of theatre and performance. Mike’s broad cross-disciplinary practice has been shown at a range of theatres, galleries, and festivals. He has also participated in many conferences, workshops, and symposia and exhibited video installation work nationally and internationally. Mike supervises post-graduate research projects and is a link tutor for the partnership colleges.

Mike is an artist, scholar, writer, and director with research interests encompassing contemporary theatre and performance, live art, time-based practices, digital media, site-specific performance, installation, and participatory art. Mike has created a range of theatre performance and video installation works and all kinds of constructed situations with people, places, and things. He has specialized knowledge/interest in the field of visual and cinematic theatre with a particular focus on the Fantastic and the Uncanny in contemporary art and performance.

Mike trained in Fine Art (Time Based Media) before going on to do post-graduate study in Contemporary Theatre Practice. He has a background as an actor, writer, and director in community touring theatre and theatre in education (T.I.E). He has worked with many companies including Pyramid Theatre, Manchester, and Outcast Theatre, London. As a theatre practitioner, Mike has created a wide range of experimental and multimedia theatre performance work. Writing, directing and devising credits include the Sunday Times/National Student Drama Festival Award-winning 'Jack', which also received a Scotsman Fringe First Award at the Edinburgh Fringe Festival before touring nationally. Other productions include Wedekind’s 'Spring Awakening', Ionesco's 'The Bald Prima Donna', and Lorca’s 'The House of Bernada Alba' all for Aspects Touring Company. He has also created several large-scale devised pieces, including 'Sex & Essence' (Edinburgh Festival), 'Volatile/Bodies', EXPO Festival, Nottingham, and 'Portrait of Dora' (Chapman Theatre). His video installation work has been exhibited nationally and internationally including at the Art Zond Festival in St. Petersburg, Russia. He has also written, directed, and produced several short films including 'Madeleine', which was first premiered at the International Festival of Cinema and Technology in Seattle, USA. Mike has a long experience of facilitating and participating in many workshops including the Tramway Theatre in Glasgow and at Bonn International School, Bonn, Germany.