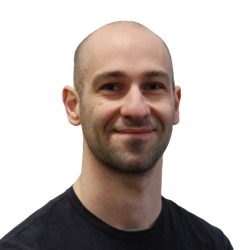 Lecturer in Dance
School of Arts and Media
0

Giorgio is an Independent Dance Artist, Franklin Method educator and Pilates instructor with considerable national and international experience of working professionally as a performer and teacher. As a dance facilitator he has expertise in the use of imagery and visualisation techniques to facilitate efficient and effective movement. Giorgio is also a Fellow of the Higher Education Academy with significant teaching and learning responsibilities within the dance course.

Giorgio teaches a range of practical sessions within the dance course, including contemporary dance technique, contact improvisation, contemporary repertoire, performance and professional skills. His teaching is informed by direct experience within the field and it is kept current through regular ongoing collaborations with the dance industry, such as his teaching on the national Centres for Advanced Training in Dance scheme, as well as his movement directing/mentoring work. As a practice-led researcher Giorgio’s interest lies in the use of imagery within processes of dance composition. His work has received national and international support and his solo, SAISERIT, was performed between 2017 and 2018 both in Italy and in the UK, being programmed in public platforms for dance as well as in academic settings.

Originally from Italy, Giorgio trained in dance at the London Contemporary Dance school, graduating with a Master of Arts in Contemporary Dance with distinction. Subsequently he was awarded a postgraduate certificate in Teaching and Learning in Higher Education from the University of Central Lancashire. Giorgio is also a Pilates instructor and a Franklin Method educator, having trained directly with Eric Franklin and Morten Dithmer in Paris and subsequently in London. As a performer Giorgio danced for Henri Oguike Dance Company, Motionhouse and Joli Vyann, among others, touring and teaching worldwide within indoor and outdoor festivals since 2007. Between 2013 and 2015 he was Rehearsal Director of the graduate company 12 Degrees North and his movement directing skills have since been employed by other professional dance companies such as Kapow Dance and Lucy Starkey Dances. Giorgio is an Associate Dance Artist with Arty-Physical and collaborated in the creation and touring of the Norse Myths Project. The work was selected and programmed in 2018 by Listaleypurin, a school touring programme in the Faroe Islands, financed by the Ministry for Culture, Education and Research, the Association of Municipalities and the Nordic House.