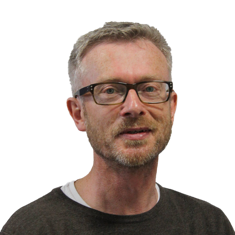 Andrew's journalism career began with a punk fanzine in his teens. After his undergraduate Psychology and Philosophy degree, he reported and sub-edited on regional and national newspapers and magazines. A specialism in HIV/AIDS led to three years working for Zambian NGO Family Health Trust, helping young people to produce their own training and education materials. Back in the UK, an interest in history led to a part-time Masters a full-time AHRC-funded PhD, and an academic career. He is currently editing the only known diaries of a Victorian provincial journalist, Anthony Hewitson (1836-1912), and produced a play marking the centenary of Hewitson's death, in collaboration with playwright Derek Martin and actor John Hickey. Andrew gives talks to local history groups, and has given interviews to the media about newspaper history. He has written two articles for The Conversation, and contributes to a number of history blogs.

Andrew is interested in the history of journalism, and how readers used newspapers. He is particularly interested in how the provincial press promoted and reflected local and regional identities. He is keen to supervise research projects on any aspect of journalism history.