Young people experience life on the frontline at CadetFest

Young people from all over Lancashire have been learning what life is like on the front line of public services at an event hosted by the University of Central Lancashire (UCLan) and Fulwood Barracks.

More than 40 air, army, police and sea cadets from Blackburn, Blackpool, Burnley, Morecambe and Preston took part in CadetFest this weekend. Organised by UCLan’s College for Military Veterans and Emergency Services, Myerscough College and Fulwood Barracks, the event showed the 13-17-year-olds how services such as the ambulance, army, navy and police operate by involving them in a series of simulated scenarios.

This included responding to an emergency, running a control centre, training with specialist equipment and working in teams on problem solving tasks, including an escape room scenario set by Lancashire Constabulary.

Air Cadet 14-year-old Jack Hine from Lostock Hall Academy said: “I am part of the Air Cadets because I want to be a pilot, either for the Royal Navy Aviation’s or the RAF.

“My favourite part of the day has been the first aid as it has been really practical and we got to use equipment the first aider would normally use. I have learned that you can find other paths within the military but also outside of the military.”

"We want to get them thinking early on about the many careers that a degree can lead to and hopefully break down the barriers they may feel would prevent them from attending university."

Rebecca Michella, 15, is a Royal Marine Cadet from Archbishop Temple School. She said: “I have learned how to give CPR, basically how to save someone’s life and I think that is a valuable lesson. It has been good to engage with teamwork and people who I do not really know.”

The event was funded by Future U, which is based at UCLan and is part of the National Collaborative Outreach Programme (NCOP) that supports young people to progress into Higher Education (HE). Its main aim was to show the cadets the kind of careers public services related degrees can lead to.

Dr Celia Hynes, College for Military Veterans and Emergency Services co-founder, organised the day-long event. She said: “It’s been fantastic and I hope it has inspired the young cadets. We want to get them thinking early on about the many careers that a degree can lead to and hopefully break down the barriers they may feel would prevent them from attending university.”

View images from the event on the UCLan Flickr gallery. 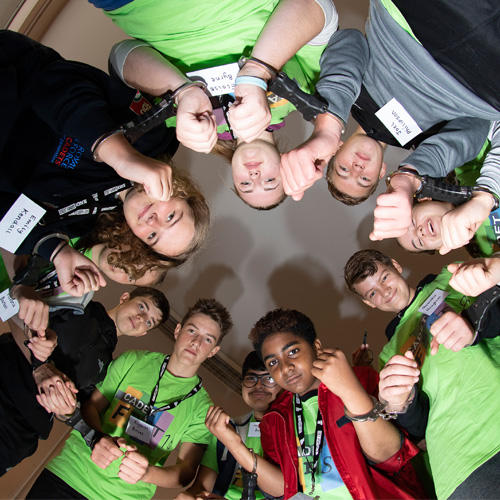