Students at the University of Central Lancashire (UCLan) were treated to a meeting with Nigel Ackland, the man with the world’s most advanced artificial arm, as he gave a guest talk at the University.

Nigel came in to talk to students about the past, present and future issues with prosthesis as well as explaining the process he went through after losing his arm.

Nigel became an amputee in 2007 following an accident at work during the night shift at a factory, losing his lower right arm in the process.

After initially struggling mentally to cope with his sudden enforced change of lifestyle, Nigel now embraces the technology that has helped bring a sense of normality back to his life.

“You stay indoors and you tend to become more reclusive. I became a lot more reclusive,” admitted Nigel, talking prior to the guest lecture. “I locked myself away from everyone which was really damaging.

“This new technology takes that damage away a little bit, a lot in fact. It breaks down barriers for able bodied people if you like. I’m not a keen fan of the phrase ‘able-bodied’, I’m not keen on the word ‘disability.’

“Personally, I don’t think anyone has the right to dis your ability. If you can live in a world that’s not designed for you and if you can thrive, no-one has a right to dis that ability.”

"I became an amputee in 2007 and I didn’t even get the chance to see this technology until 2011 and even then that was purely by chance."

Nigel, however, has not always had such advanced technology since his accident.

It was four years after his accident when he came across the technology that he is now so synonymous with. Prior to 2011, Ackland had to make-do with using tape to strap cutlery to his arm to perform day-to-day activities.

“I became an amputee in 2007 and I didn’t even get the chance to see this technology until 2011 and even then that was purely by chance. I’d gone through the NHS system which is basically a three stage treatment plan. My arm right now came along purely by chance, almost as a test.

“Psychologically, it’s a nightmare. Physically, we adjust. Humans have been around so long mainly due to our ability to adapt. If needed to do stuff with my right arm, I’d use gaffer tape or duck tap. You can stick forks, spoons, knives, anything to your stump and crack on.

“On a psychological level, however. It was tough. Very tough.”

Nigel also paid a surprise visit to a student social meeting whilst at the University. Despite having such an inspiration story to tell, Ackland remained humble when asked what impact he hopes to have on the students who heard his journey.

“I’m hoping that they can see that it’s not as complicated as maybe they thought initially. It’s not hardwired via chips to my brain and who knows what else. It’s basic technology that’s been around for longer than I have.

“I hope people understand that, yes the technology is here, yes it looks really good but can we make it, in the words of the Bionic Man, “stronger, faster, better?”

“When I’m stood in that lecture and I see the students, I’ll be looking at the future. I think that’s pretty cool. If I can make any sort of impact on these students, that’s a blessing.” 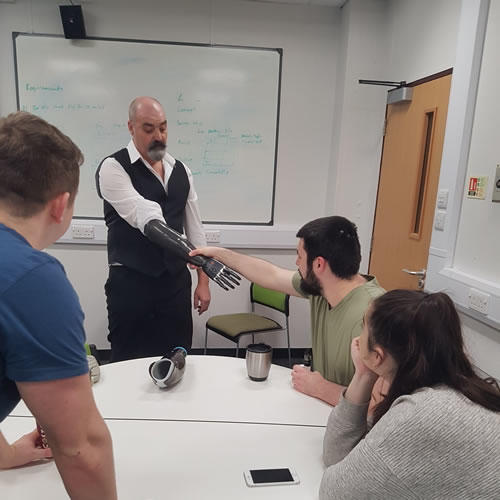