Student nurses from the University of Central Lancashire (UCLan) have been described as ‘inspirational’ by the President of the Royal College of Nursing (RCN) following their fundraising efforts.

The dedicated student and staff team from the UCLan School of Nursing has spent the last few months raising funds for the RCN Benevolent Fund, including a Christmas Nurses’ Day fundraiser, various raffles and bake sales throughout the year. In total they raised £1,000 for the charity with an additional £250 for the Florence Nightingale Foundation. It is the seventh year that UCLan has raised funds for both charities.

RCN President, Cecilia Anim, came to the University to receive a cheque on behalf of the charity.

She said: ‘On behalf of the RCN, I would like to say thank you to both staff and students at the University of Central Lancashire. I am inspired by your hard work and dedication, and know that this money will go a long way to supporting nursing staff who need it most. I am proud of your continued support and your commitment to our nursing family.”

Third year adult nursing student Georgia-Maia Oliphant has been involved in raising money for the two charities for the last three years. She said: “The Royal College of Nursing Benevolent Fund gives something back to those nurses who have given so much of themselves during their careers, helping them when they need it most. It's a brilliant fund and really reaches out to so many nurses. Florence Nightingale helped to pave such an inspiring career path for so many nurses and I believe it's important to carry on the passing of the lamp, essentially passing on the knowledge, to future nursing generations.

“It's rewarding knowing that through our fundraising were able to support so many people. It may only be a small act but whatever fundraising we could do we have done in order to raise money for such important causes.”

"It's rewarding knowing that through our fundraising were able to support so many people."

The Head of the School of Nursing, Dr Karen Wright, thanked the staff and students for their efforts. She said: “I am always humbled by the dedication and hard work that goes into making this annual fundraising event such a success. These people really show what being a nurse is all about and their compassion and willingness to help others to truly amazing.”

Watch a video of Georgia-Maia Oliphant and UCLan Senior Nursing Lecturer Sabina Gerrard talk about their fundraising efforts for the RCN. 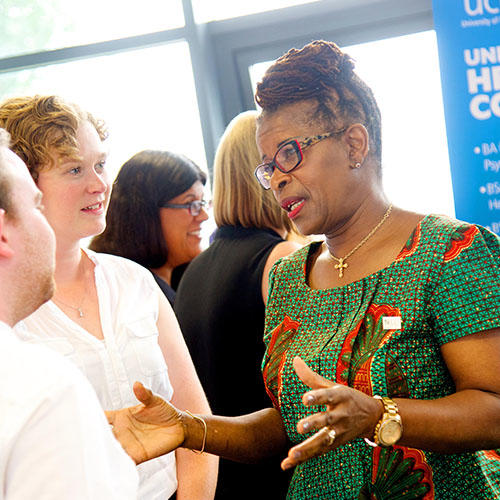 UCLan's student nurses have been described as inspirational