Young readers inspired at unique event outside of London

Young readers from across the country have been inspired by their favourite authors at the second Northern Young Adult Literary Festival hosted by the University of Central Lancashire (UCLan).

It is the second time UCLan has hosted the event, which brings authors, publishers and other industry experts together with readers and young writers in the only event of its kind on the North of England. It’s organised by UCLan Publishing, the only student-led, student-run publishing house in the world and attracted more than 500 visitors from all over the country including Glasgow and London.

This year’s theme was around mental health and inclusivity and attracted well-known authors including Melvin Burgess, AJ Hartley and debut fantasy novelist Rose Edwards, who signed copies of her book The Harm Tree for more than two hours.

Visitors were treated to writing workshops, panel discussions around how mental health is reflected in young adult literature, inclusivity and character representation and what it takes to write a thriller, as well as meeting their favourite authors.

Head of UCLan Publishing Debbie Williams said: “What a fantastic day. Events like this don’t tend to happen outside of London so we’re very proud to bring something of this scale to Preston. We’ve had some amazing feedback from our visitors, many of whom went away feeling very inspired.”

Author Mel Darbon commented via Twitter: “It was a fantastic day and I learned so much and met so many amazing people - authors, bloggers, teachers, librarians, book sellers, and the wonderful readers.”

"It was a fantastic day and I learned so much and met so many amazing people - authors, bloggers, teachers, librarians, book sellers, and the wonderful readers."

Award-winning writer Will Hill added: “Had a lovely time at the @NYALitFest yesterday - a really great event, packed with people (despite the weather) and full of enthusiasm for YA books and authors.”

Visitors were also enthusiastic in their comments on Twitter. One said: “Now I’m settled down for the evening I can really appreciate what a difference this made to my experience of today. Thank you @NYALitFest! You have made one bookworm much more chilled and happy this evening.” Another wrote: “So many amazing panels and author wisdoms today. Thank you @NYALitFest, may it get bigger and better every year!”

Publisher at UCLan Publishing Hazel Holmes, added: “I'm completely overwhelmed with the response so far. It's just so wonderful to hear what an impact the festival had on readers, teachers and librarians.

“Mental health and inclusiveness is such an important topic, and to have a room packed with more than 500 people all full of empathy and understanding was really quite something. We started off pretty small last year, but this was on a completely different scale. I really hope we can make this an annual event.”

Images from the event are available on the UCLan Flickr gallery. Find out more about the Festival and  UCLan Publishing. 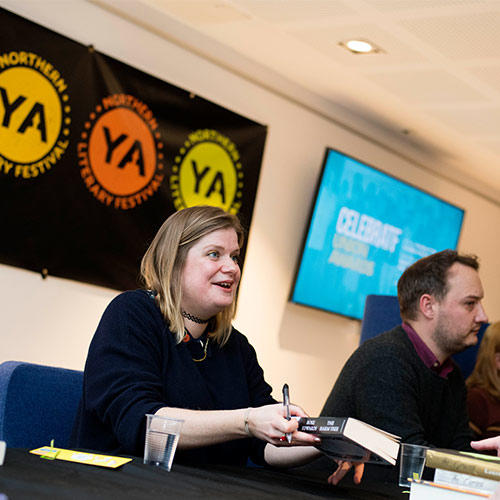