Wild bird lovers are being invited to name a newly fledged and satellite tagged bird of prey to celebrate a research project at the University of Central Lancashire (UCLan) that aims to aid the protection of the beautiful yet threatened hen harrier.

Launching in time for National Hen Harrier Day on Saturday 6 August, the #nametheharrier campaign, run by UCLan and supported by the Royal Society for the Protection of Birds (RSPB), wants members of the public to name the latest fledgling of the UK’s most threatened bird of prey from a shortlist of three names.

UCLan has been asked to name the female hen harrier chick, which has hatched on the Isle of Mull in Scotland, following a four-year research project led by geneticist Dr Arati Iyengar to create a DNA based individualisation kit that can be used to sex and identify individual hen harriers with very high accuracy. This will be a very useful forensic tool which could potentially assist in bringing about prosecution of people who illegally kill these birds.

Best known for their spectacular “skydancing” courtship display, hen harriers were driven to extinction by Victorian gamekeepers on mainland Britain by 1900. Following a natural recovery, they face an uncertain future once again as their tendency to eat red grouse, a popular gamebird, brings them into conflict with the driven grouse shooting industry. The 2008 Natural England report, ‘A future for the Hen Harrier in England?’ cites illegal killing associated with grouse shooting as the main factor restricting the growth of the hen harrier population.

"The DNA kit will allow us to use evidence recovered from a person suspected to have killed a hen harrier, for example blood or feathers from a vehicle, and match the DNA profile generated to a sample recovered from a nest site."

Dr Arati Iyengar commented: “The DNA kit will allow us to use evidence recovered from a person suspected to have killed a hen harrier, for example blood or feathers from a vehicle, and match the DNA profile generated to a sample recovered from a nest site. The kit is very powerful. The probability that DNA profiles from two randomly selected individuals will match is on average about one in 27 million.”

Currently there is enough habitat for over 300 breeding pairs of hen harriers in England but this year, there were only three successful nests – less than 1% of the potential. The Forest of Bowland, an area traditionally considered to be the most important site for breeding hen harriers in England, failed to attract a single pair of hen harriers for the second time in four years, highlighting the seriousness of the bird’s plight. In 2015, four males inexplicably disappeared from active nests in Bowland which resulted in the eggs being abandoned by the females who depend on the males for food whilst incubating.

The young female chick to be named is one of several hen harriers fitted with satellite tags this year, as part of RSPB’s Hen Harrier LIFE Project, an exciting, part-European funded, cross-border programme of conservation which aims to raise awareness and secure a future for these birds across northern England and Scotland. From the end of the summer, bird lovers will be able to follow the birds’ movements online at www.rspb.org.uk/henharrierlife and on Twitter @RSPB_Skydancer.

Blánaid Denman, Project Manager for RSPB’s Hen Harrier LIFE Project said: “The work of Dr Iyengar and her colleagues at UCLan is a huge step forward in the fight against wildlife crime and the protection of hen harriers. In being able to genetically identify individual birds, it also has the potential to teach us more about the population dynamics of this species. 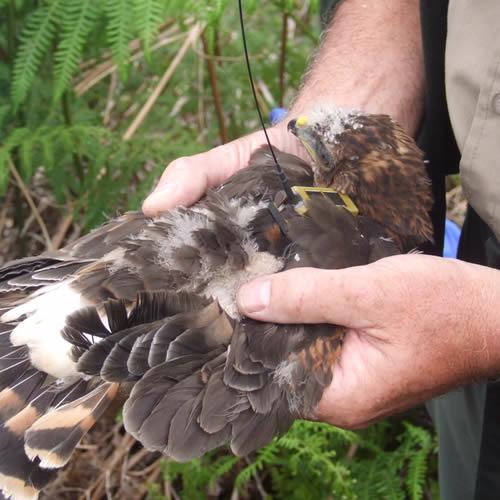 "Satellite tagging and the new DNA kit are both important tools in helping us to understand more about where these birds go and identify where they’re most at risk. It will be very exciting to watch where this chick goes next."

“Hen harriers travel widely outside the breeding season, so anything that threatens them in one area is likely to affect the population as a whole. A bird from Mull could very easily end up attempting to breed in Bowland and wouldn’t that be an amazing story. Satellite tagging and the new DNA kit are both important tools in helping us to understand more about where these birds go and identify where they’re most at risk. It will be very exciting to watch where this chick goes next. I just hope Dr Iyengar’s kit is never needed for her.”

The #nametheharrier campaign runs until the 13 August. The three name choices are:

Anyone interested in taking part can vote for their favourite name via an online survey which is also available on Facebook and Twitter via the #nametheharrier hashtag. The results will be announced on 15 August.

The satellite tracking device has been jointly funded by UCLan and the RSPB. A paper describing the DNA testing kit, the SkydancerPlex, was recently published in the Journal Forensic Science International: Genetics.