Chris Hall, Sports Correspondent for ITV Granada News, has been named as News Journalist of the Year by the Royal Television Society North West.

The award is Chris’s ninth since graduating from UCLan in 1998 with a Diploma in Newspaper Journalism and follows being awarded Sports Journalist of the Year at the O2 North West Media Awards for the fourth time earlier this month.

Chris said: “This award was a huge thrill for me because it's a prestigious ceremony and I was nominated alongside hard news journalists who I had respected and admired for years.

“I can't thank UCLan enough for starting me out on the path to my dream job. I certainly wouldn't be in this position without my degree. This was only a one-year course, but we crammed so much into that time and learned so many skills - many of which I'm still reliant on today.”

"I can't thank UCLan enough for starting me out on the path to my dream job. I certainly wouldn't be in this position without my degree."

Since graduating, Chris’s newsgathering skills have helped him progress from a local newspaper reporter to becoming a household name on TV screens across the North West.

Chris started in journalism after impressing on a two-week work placement while studying at UCLan, then focused on sports journalism working at newspapers across the north before becoming a press officer for Wigan Athletic and, in 2003, as a sports journalist for Granada.

Now, Chris presents Granada’s nightly sports bulletin from the ITV studios, as well as reporting live from locations and producing packaged news reports on all sports happening in the North West. In addition, Chris has covered major sporting events around the world, such as Champions League football and major boxing events. Next year, he will report for all ITV regional news programmes on the Olympic Games in Tokyo. 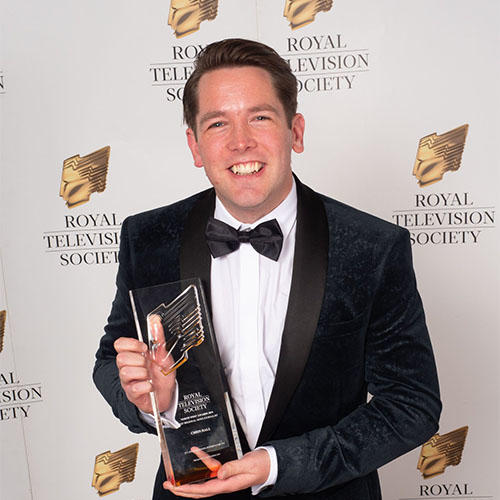