The University of Central Lancashire (UCLan) has been recognised for its role in improving stroke education and training in the UK at the annual Guardian University Awards.

The University won the coveted Digital Innovation prize for its work in transforming the usability of the Stroke-Specific Education Framework (SSEF).  The SSEF consists of 16 elements of care, based on the quality markers in the National Stroke Strategy, which cover the whole of the stroke care pathway.  The award winning web-based system allows those working in healthcare to self-assess their knowledge and skills, and signposts them to relevant education and training.

The SSEF, the result of a Department of Health funded national collaboration of stroke experts led by UCLan professor of stroke and older people’s care Dame Caroline Watkins, was originally developed in 2009.  Although it was welcomed by the stroke community as a step forward, its implementation in practice was sporadic and a new approach was required.  The Framework was then backed by the UK Stroke Forum, a coalition of all the key stroke care and research organisations hosted by the Stroke Association.  The UCLan project turned the SSEF and its toolkit into a user-friendly web-based system that was re-launched in 2015 and is used by 1,400 individuals, while 48 training providers and 80 stroke education courses are registered on the website.

"It's been a fantastic experience to work together to further develop a great education framework into a superb user friendly web based resource."

The project was a joint venture between the Faculty of Health and Wellbeing's stroke research team, led by Professor Dame Watkins, and the university’s Innovation Lab, a team managed by Danny Livingstone that recruits and mentors UCLan graduates providing them with work experience and developing their employability skills.  The team managed to keep costs down to £10,000 by completing all the work in-house and using a UCLan Idea Investment Voucher.

The SSEF resource, which is free to all, allows users to create an individualised knowledge and skills passport, and automatically signposts users to education resources that are bespoke to individuals’ needs.  Users’ passports automatically update when they have completed SSEF registered courses and an online feedback mechanism allows individuals to review and rate the quality of courses.

Professor Dame Watkins said: “It's been a fantastic experience to work together to further develop a great education framework into a superb user friendly web based resource.”

“Its implementation into mainstream practice has the potential to vastly improve the quality of stroke care. In order to give high quality care, staff need to have the right knowledge and skills, and courses and training need to reflect this.” 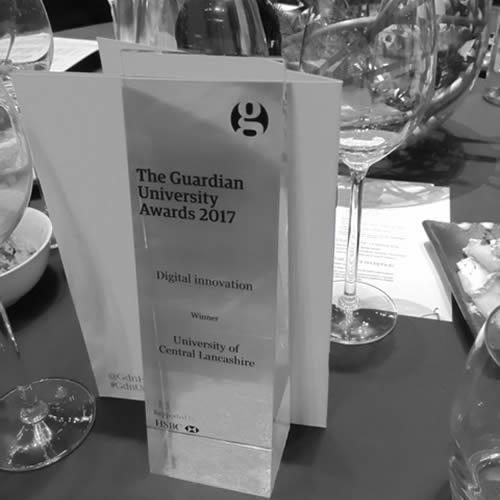 "In order to give high quality care, staff need to have the right knowledge and skills, and courses and training need to reflect this."

The annual Guardian University Awards showcase some of the best work carried out by universities around the UK.  Prizes are presented across 13 categories including student experience, research impact and entrepreneurship.

The Guardian’s universities editor, Judy Friedberg, said the awards ceremony, presented by Lauren Laverne on Wednesday night, was a chance to celebrate brilliance at universities.  She referred to the awards as the ‘UnTEF’, in reference to the government’s new Teaching Excellence Framework (TEF), which will rank universities according to their teaching quality.

“By early June, we’re going to have the results of the Teaching Excellence Framework and we’ll know exactly who has been allocated gold, silver and bronze ratings. While the TEF pits university against university, I like to think of our awards as the UnTEF.

“We don’t judge all universities by the same clunky metrics. We look for examples of brilliance in all types of universities – and then we trumpet those successes to Guardian readers around the world.

“Do we think a success story is any less important because it took place in a ‘bronze’ university? On the contrary. We think that’s something the entire sector should applaud,” she said.