Student challenges stereotypes of Muslim women through her art

A local art student has used her painting skills to challenge the stereotype of Muslim women in Britain.

Fine artist Azraa Motala from the University of Central Lancashire (UCLan) has created three large paintings of herself for her final year project.  Based on photographs of her face and hands they consider religion, modesty and Azraa’s own position as a British Muslim in a society that often sees the hijab and veil as repressive.

The 21-year-old from Fulwood said: “The paintings are all very personal to me and it’s the first time I’ve ever painted myself.  During the 19th Century the veil was seen as a signifier of the impenetrable private chambers of the harem, religion, sexual segregation, polygamy, exoticism and sadism.  Paintings from this time, such as The Turkish Bath, reflect exotic fantasies of Middle Eastern women and through my work I wanted to re-appropriate the image of the female body and the Muslim woman, stripping it away from stereotypes of the past and modern society.”

"The paintings are all very personal to me and it’s the first time I’ve ever painted myself."

Azraa used oils and acrylics on canvases she made herself by hand to create the paintings.  One is a close-up self portrait and the other two are of her hands.

She said: “Hands are able to show emotion in so many ways including in worship and prayer and I want to challenge the people looking at my paintings and make then think; is the hand holding the black cloth or is it bound by it?”

The former Penwortham Girls’ High School and Cardinal Newman College pupil has been interested in art from a young age but only took up painting while at college.  After graduating from UCLan in July, she plans to apply to art college to study for a Masters in fine art.

Azraa added: “For a long time I dabbled in different mediums and it was only in the last year that I feel like I’ve found my medium in oil painting.  I definitely had a lightbulb moment when I realised I’d found my niche.”

Azraa’s work will be on display at UCLan’s Preston campus from 9-16 June as part of the Lancashire Arts Festival Degree Show. 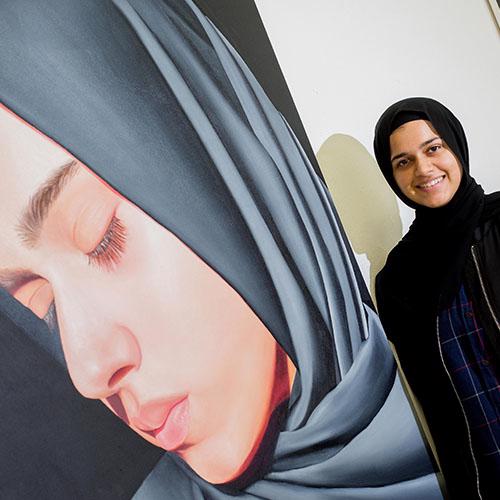