The University of Central Lancashire (UCLan) is celebrating a decade of training the next generation of dentists.

When UCLan’s School of Dentistry opened its doors 10 years ago, it was one of only two new dental schools to be created in England for over 100 years.  Since then, UCLan dental students have treated more than 23,000 patients during their training and the School has produced 224 new dentists who have expanded the region’s dental workforce considerably. Almost 60 of its new dental graduates have chosen to establish their careers in the Preston area with more settling in the wider North West region.

The University invested £5.25 million in its state-of the-art dental school in Preston, which has one of the most sophisticated ‘phantom head’ rooms in Europe where students learn their skills on simulators before progressing to patients.  It is also one of the few universities in the country to boast its own on-campus Dental Clinic, allowing undergraduate students to obtain practical experience in high-end dental work.

The School was the first to pioneer a new mode of dental education, in which the graduate entry Bachelor of Dental Surgery students gain their experience in local community Dental Education Centres (DECs) rather than city centre hospitals, which has provided a good alternative to the traditional approach. The DECs, located in Accrington, Blackpool, Carlisle and Morecambe Bay, were established in areas of high need and poor dental health where access to NHS dentistry was limited, in part, owing to difficulties in attracting qualified dentists to the area.

At a special 10th anniversary event, which welcomed graduates and former staff back to the School, NHS England’s Deputy Chief Dental Officer and UCLan Honorary Professor Eric Rooney commented: “Over the last 10 years many of the initial aims of the School have been fulfilled, helping patients and creating a vibrant dental academic community."

"Our population, their needs, and the way we care for them is changing and UCLan is well placed to develop and adapt over the next 10 years and beyond"

This 10-year landmark comes as the UCLan School of Dentistry is expanding its teaching programmes, leading nationally in the way it delivers quality inter-professional dental education in the DECs and increasing research activity to include dementia and brain degeneration, head injury management, clinical sciences, nanotechnology medicine and general dental health education.

Angela Magee, Head of the UCLan School of Dentistry, commented: “The University set up the School as a direct response to the needs of the region’s healthcare economy when the Government made a clear commitment to improving access to NHS dental services.  What we have achieved over the last 10 years is phenomenal, producing more than 220 fully qualified dentists who have gone onto work in the NHS and filling a skills gap in areas of the region that lacked local dental services.

We want to celebrate our role in the wider community, to which our staff, students and alumni continue to contribute." 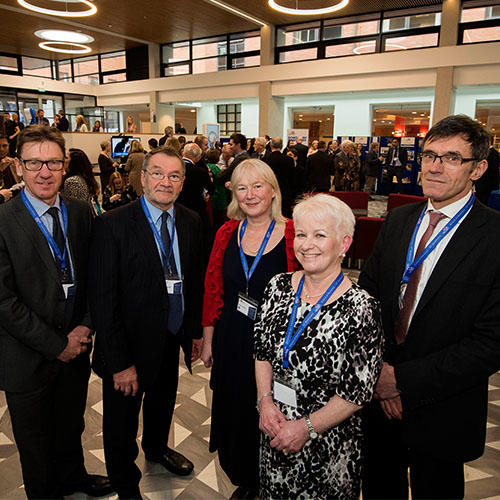 "We’ve come a long way in a relatively short space of time and not only is the anniversary event a celebration of our joint achievements, it is also an opportunity to focus on future developments as we expand our teaching programmes and research portfolio"

Daniela Vargas, who graduated in 2011, commented: “I did my foundation year down in Lancaster. Then I got the opportunity to come back home to Carlisle, which is where I am from. I’ve been here for over four years now, I’m working in general practice and I also work here in the Dental Education Centre in Carlisle. The way the course is structured prepared me very well for foundation year. It really prepared me to go out into general practice.”

Wendy Thompson graduated in 2012.  She said: “What became clear very quickly during our foundation training was those of us who had been through the DECs were that much more confident treating NHS patients. I was a student at Morecambe DEC, and after my foundation training year I also applied to become a clinical supervisor here. So I worked here one day a week. The UCLan family, let’s call it, has given me a fantastic base from which to start my career, grow my career, and now looking out and beyond towards the future of dentistry, the future of international collaborations.”