Preston Stands Together Against Racism

A choir made up of pupils from Preston schools recently performed at a successful event to mark the United Nations International Day for the Elimination of Racial Discrimination.

The popular event, celebrating diversity and opposing racism, was attended by over 250 people and took place at The University of Central Lancashire’s (UCLan) Venue 53.

Members of the UK Youth Parliament spoke at the event. Chengkai Xie spoke about Preston's harmonious and cohesive diverse community that work together to promote fairness, justice and equality for all citizens. Ammaarah James spoke about the negativity of racism and the need for tolerance in society. Other presentations were given by Anisah Zakariya-Hill and Micah Bimson about anti-racism and the need for tolerance.

Pupils from Ashton Community Science College gave a drama and dance performance during the evening.

These events formed part of the wider event to mark the International Day, which was centred on Preston Flag Market. This involved a range of community groups and organisations coming together to celebrate the city's cultural life with live music and performances.

"On the night the young people of Preston delighted a capacity audience with song, dance, drama and speeches that were both empowering and entertaining."

As well as meeting people from diverse backgrounds, audiences heard internationally-recognised artists and musicians acknowledging their race, identity and culture through music.

The Standing Together Against Racism events was organised by the Preston & Western Lancashire Racial Equality & Diversity Council, Preston City Council, Lancashire County Council, the Black and Minority Ethnic Forum, More Music, the University of Central Lancashire and the Creative Communities Group, with the support of a wide range of community groups.

Russell Hogarth, UCLan Honorary Fellow, Community Ambassador and Chair of the Creative Communities Group, said: "I had the honour and pleasure of welcoming the audience to UCLan’s Venue 53 for this year's Standing Together Against Racism event.

“UCLan Deputy Vice-Chancellor Liz Bromley delivered a powerful message to the audience around how the University can play a huge role in stretching minds with new experiences, celebrating our differences and encouraging a feeling of togetherness across the whole community in Preston.  This was followed by a series of guest speakers, including UCLan Students’ Union President Sana Iqbal who spoke passionately about her own personal experiences and her role at the University.

“On the night the young people of Preston delighted a capacity audience with song, dance, drama and speeches that were both empowering and entertaining.  This is the second year that we have hosted the event at the University and many felt that this year was even better than last.

“Nigel Farnworth from the UCLan Creative Communities Group (CCG) did a fabulous job on the night as MC, helping the event to run smoothly. CCG members also very kindly volunteered their services to support both the Friday night activities and the Saturday event in the city.” 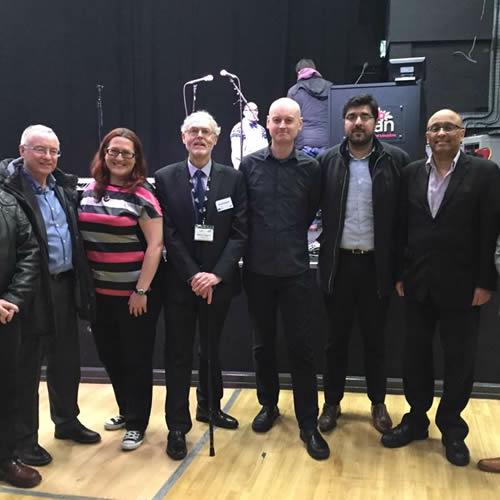 UCLan's Russell Hogarth with some of the attendees

Nadeem Ashfaq, Co-Founder of Preston’s Interfaith organisation Light Foundation, said: “The event was magnificent as it attracted in unity and diversity pupils across Preston. These types of events where the youth of today are involved are greatly important, and I feel have to be replicated throughout the world. It is our youth that hold the keys to our futures.

“It’s always encouraging and deeply moving to see the University of Central Lancashire lead on such initiatives, thus, sending a message of tolerance, cohesion and acceptance."

County Councillor Matthew Tomlinson, cabinet member for children, young people and schools, said: "This was a fantastic event. It addressed a sensitive subject by promoting positive messages, rather than focusing on negative prejudice.  The audience heard the choir sing their hearts out, as well as watching a fantastic creative and hard-hitting drama and dance performances from Ashton Community Science College echoing the message of the choir.

"I was so pleased that Members of the Youth Parliament delivered moving and informed speeches to emphasise the messages of the performances.  I'm proud that our young people played such a prominent role at the event in various ways. It is so important to recognise and support this international day.

"Despite the rain on the day, the crowds really joined in, especially during the Bollywood and salsa dancing performances.

"So many people and organisations deserve praise for bringing this event together, none more so than the pupils who took part, for all their hard work, time and effort. I really appreciate the hard work that everyone put in organising this event.

"Hopefully, our young people will build on the achievements we have made by working together so far."

Councillor Matthew Brown, Preston City Council's cabinet member for social justice, inclusion and policy, said: “I am delighted that Preston's community came together for the fourth time to celebrate Standing Together Against Racism, commemorating the UN International Day for the Elimination of Racial Discrimination. These events saw the participation of many talented children and young people who have the right to feel safe and valued regardless of race, religion or culture. I'm glad that people supported them."

Mark Hendrick, Member of Parliament for Preston, said: “I was delighted once again to attend the STAR School Choir event at UCLan. There are many people and organisations that work very hard behind the scenes all year round to ensure that culture of acceptance, co-existence and tolerance is fostered and promoted. This event is a fantastic way to showcase that achievement. It also sends a strong clear message Preston is and always will be a city of tolerance.

“This year, the UN’s campaign for the International Day for the Elimination of Racial Discrimination, on 21 March, has chosen as its theme ‘racial profiling and incitement to hatred, including in the context of migration’.  In these uncertain times, it is more important than ever to show that we all stand together against racism in all its manifestations, including racial discrimination, xenophobia, intolerance towards migrants and refugees, anti-Semitism and Islamophobia.

“I have always been proud of Preston’s history as a place where migrants and refugees are largely welcomed and I am hopeful that people continue to welcome and celebrate diversity in this city.”

Mr Makhlisur Rahman JP, Chair of Preston & Western Lancashire Racial Equality and Diversity Council, said: “This event is so important in promoting community cohesion. We are extremely proud of our local schools and young people and I'm personally delighted when they take to the stage like they have just done to convey a strong message of peace and integration.

"I firmly believe that Preston is a model city of good community relations and I'm delighted to promote a message of One Community – One Preston.”