A University of Central Lancashire (UCLan) graduate who undertook a NASA internship has landed a job with a major technology company.

Physics graduate Jasmin Evans has been appointed as a systems engineer for Lockheed Martin, a company which specialises in the development, integration and sustainment of advanced technology systems, products and services.

The 22-year-old, from Hexham, celebrated her graduation last week and starts her new job in September. She said: “I’m really looking forward to it. I did consider further study but I feel this graduate scheme is right for me because I know it will give me a great start to my working life and give me a real-world experience.”

The former Billingham St Michael’s RC High School pupil has made the most of her four years at UCLan. She has visited America twice, first for the Grace Hopper Celebration of Women in Computing in Arizona and secondly for an internship at NASA Goddard in Maryland.

"I didn’t do very well in my A Levels so I had to look for a university through clearing. I contacted UCLan and was told about the foundation course."

She said: “It was wonderful to have the opportunities to travel to America. The Arizona trip was part of a STEMettes mentoring programme, in conjunction with Deutsche Bank, while my visit to NASA Goddard was amazing. I was there for a week and I interviewed astronaut Piers Sellers and Nobel physics laureate John Mather along with writing blog entries for NASA Blue Shift.”

In addition to undertaking a placement at the Ogden Trust, Jasmin also took part in many outreach activities, including the award-winning Lancashire Science Festival. She also set up her own project called Touching Space, a scheme that aimed to encourage blind and partially sighted people to get in to astronomy and engineering.

The former Newcastle College student came to UCLan via clearing and studied on the foundation course before continuing on to the BSc (Hons) Physics degree.

She said: “I didn’t do very well in my A Levels so I had to look for a university through clearing. I contacted UCLan and was told about the foundation course. It was great because it gave me confidence, especially with my maths. It was just what I needed and gave me an introduction to the labs and the physics facilities.”

Jasmin was one of 4,000 students who graduated in front of family and friends in Preston’s Guild Hall. 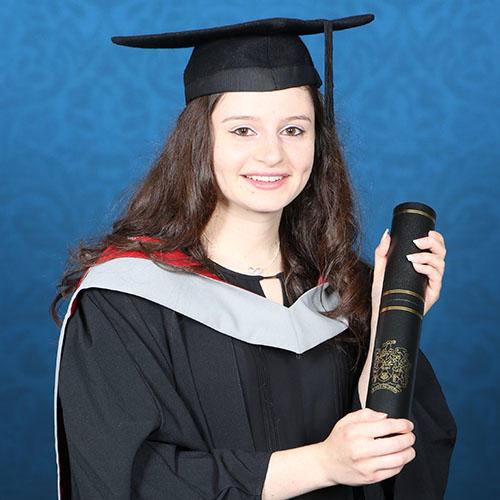