A mother-of-three has won a national midwifery prize for her “innovative” social media awareness campaign.

Hannah Tizard, a full-time midwifery student at the University of Central Lancashire (UCLan), scooped the Johnson’s Award for Evidence into Practice at the Royal College of Midwives ceremony for her research and subsequent identification of a gap in information for women to make more informed choices about optimal cord clamping (OCC).

The 38-year-old, who undertakes her clinical placements in Blackpool, created the #BloodtoBaby campaign initially via social media after sharing self-made OCC stickers. Requests for the stickers became overwhelming and it was then she realised there was such a huge demand from midwives for tools to inform women of the benefits of delayed cord clamping.

The former child protection officer, from Elswick, said: “I was thoroughly honoured to win the award, I have huge respect for the work of the other contenders in my category which included the NSPCC, the Perinatal Institute and Coventry University Hospitals. I was thrilled that I made the shortlist so to be named the winner was truly magical.”

Judges praised her work and said: “This use of social media has enabled Hannah to reach far beyond the UK. As a student midwife she has demonstrated determination despite obstacles in her way. She has found funding to assist in printing and disseminating resources.”

The second-year student started the campaign in February 2015 and was knowledgeable about the issue after running positive birthing groups prior to starting her degree.

"As a student midwife she has demonstrated determination despite obstacles in her way."

Cathy Warwick, Chief Executive of the Royal College of Midwives, commented: “To win an award is a real achievement. Hannah’s social media campaign is innovation in action and will equip midwives with the tools to help women make more informed choices when it comes to the birth of their baby.”

Kate Hulatt, Johnson’s Professional Senior Brand Manager, added: “We are delighted that Hannah has won this year’s Johnson’s Award for Evidence into Practice for her well-researched and informative #BloodtoBaby campaign. Hannah used her passion and expertise in the field of midwifery to full effect and also leveraged wider platforms such as social media to help initiate wider conversations about evidence-based midwifery practice.”

Hannah, who also runs her own babysitting agency in the Lake District, added: “Everyone is capable of harnessing a passion and taking it to another level, even the smallest changes make a difference to someone. What could be better than a future midwifery service full of exciting innovations enabling us as midwives to provide a better service to women and their families. At the awards I saw so many shining examples and it warmed my heart.”

She was presented with her award in London on 8 March. The ceremony was hosted by journalist and broadcaster Kate Silverton. 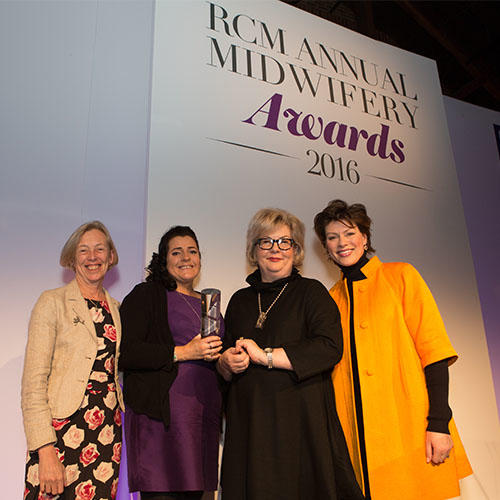