Magnetic fields could hold the key to star formation

Astronomers have discovered new magnetic fields in space, which could shed light on how stars are formed and uncover the mysteries behind one of the most famous celestial images.

For the first time, extremely subtle magnetic fields in the Pillars of Creation – a structure made famous thanks to an iconic image taken by the Hubble Space Telescope – have been discovered and mapped.

The structure consists of cosmic dust and cold, dense gas that have nurseries of stars forming at their tips. This innovative research has shown that the magnetic fields that run along the lengths of the Pillars are at a different angle to the regions surrounding the Pillars, revealing the reason behind their unusual structure.

This ground-breaking discovery suggests that the Pillars have evolved due to the strength of the magnetic field and that the Pillars are held up thanks to magnetic support, suggesting that stars could be formed by the collapse of clumps of gas being slowed down by magnetic fields, and resulting in a pillar-like formation.

The discovery was made by a global team of researchers known as BISTRO and led by astronomers from the University of Central Lancashire (UCLan) who made measurements at the James Clerk Maxwell Telescope in Hawaii. Using an instrument on the telescope known as a polarimeter, the researchers showed that the light emitted from the Pillars is polarised, indicating the direction of the magnetic field.

"This discovery will revolutionise our understanding of how stars are formed."

Professor Derek Ward-Thompson, Head of the School of Physical Sciences and Computing at UCLan, said: “The technology employed to view the minutiae of the magnetic fields is truly remarkable, and the fact that we have been able to observe the incredibly weak magnetic field with this sensitive instrument will help us to solve the mystery of the formation of stars.”

The James Clerk Maxwell Telescope (JCMT), located on Mauna Key in Hawaii, is operated by the East Asian Observatory. The BISTRO Survey is a large team of scientists working to understand the role of magnetic fields in the formation of stars, with members from across the partner regions of the JCMT: China, Japan, South Korea, Taiwan and Vietnam and from participating universities in the United Kingdom and Canada. 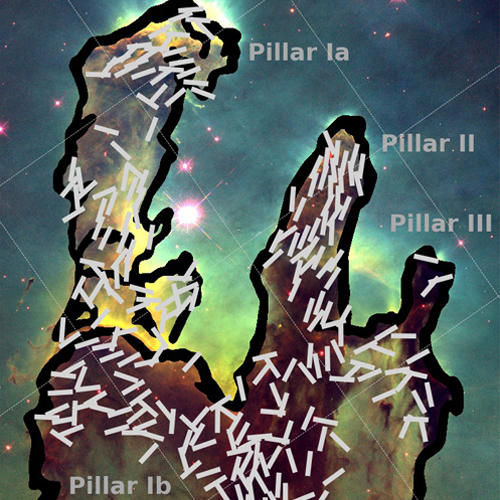