Using an advanced X-ray technique, an international team of researchers from the UK, China, the US and South Africa has published evidence for a failed carnivore attack on a sauropod dinosaur that would have lived 200 to 170 million years ago, pointing to an increased understanding of the behaviour and lives of dinosaurs.

The research, published today in the journal Nature Scientific Reports, provides a detailed report of the first recognised case of an abscess in a sauropod dinosaur from the Lower Jurassic of China, now known as the Yunnan Province, which was caused by infection brought on from the bite of a large predatory dinosaur.

The discovery, found in the skeleton of a Lufengosaurus huenei held at the Yuxi Museum, was made possible by the application of a technique known as micro-computed x-ray tomography (micro-CT). This allows high-resolution slices and 3D images to be built up of internal structures of bone without damaging the fossil.

"We were able to use micro-CT to look deep inside the structure of the rib and visualise the precise changes that bacterial infection had caused, as well as to see the region of bone that had been bitten out of the rib"

As well as providing detailed evidence of interactions between large plant-eating dinosaurs and carnivorous species, the successful identification of this abscess using this technique could point to a new understanding of where certain species lived, and the impact of the diseases that they suffered from.

Dr Patrick Randolph-Quinney from the University of Central Lancashire in the UK and the University of the Witwatersrand in South Africa, said: “We were able to use micro-CT to look deep inside the structure of the rib and visualise the precise changes that bacterial infection had caused, as well as to see the region of bone that had been bitten out of the rib.

“What micro-CT is allowing us to do is understand processes such as trauma and infection in the fossil record at the cellular level, as well as looking at the whole bone. This gives us advantages over traditional histology - which slices up bone for magnification under a microscope – in that it doesn’t require us to damage precious fossils, and it also allows us to build 3D reconstructions of the whole region of disease. In this case this has allowed us to model and study the whole wound track, not just a single portion of it." 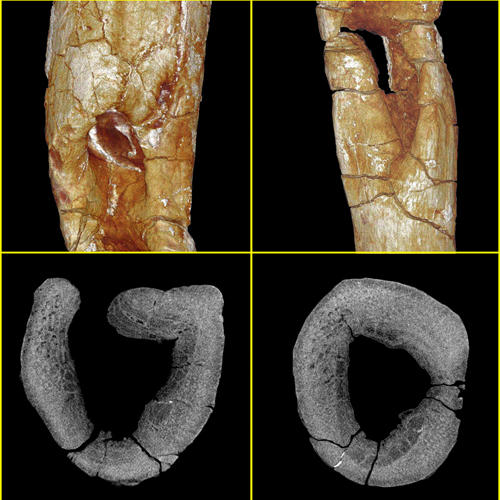 "This case is really exciting as it gives us evidence of interactions between large plant-eating dinosaur species, a sauropod, and one of the large aggressive predators preying on them at that time."

Dr Lida Xing from China University of Geosciences, who led the study, said: “This case is really exciting as it gives us evidence of interactions between large plant-eating dinosaur species, a sauropod, and one of the large aggressive predators preying on them at that time. Using the latest x-ray imaging we were able to track the changes in the bone caused by an infected bite on the sauropod, probably from a big carnivorous dinosaur. We don’t just have evidence of disease but of behaviour between animals – between predator and prey at this deep period in prehistory.”

Hao Ran from the Kunming Institute of Zoology, Chinese Academy of Sciences, said: “This is a great example of how the clinical sciences and the science of palaeontology are working together with fossils from the Chinese fossil record. Together with international collaborators we are able to advance our understanding of diseases in both the past and the present. We don’t know which predator caused the bite, but we do have a smoking gun of the attack with the bite wound it left.”

Professor Bruce Rothschild from the Carnegie Museum of Natural History in the US, added: “We identified a disease process called osteomyelitis which produces a pus-filled abscess inside the bone. This is only the second case of osteomyelitis in a sauropod dinosaur on record - the only other case comes from a giant titanosaur from Argentina – and we have the earliest recorded case of a bony abscess caused by osteomyelitis disease in the fossil record.”