A University of Central Lancashire (UCLan) academic has claimed international sporting glory for Italy this summer after swapping the lecture theatre for the great outdoors.

Luigi Lerose, a British Sign Language and deaf studies lecturer, won a bronze medal in the sprint discipline of orienteering at the Deaflympics.

He said: “I feel extremely happy to have come third as some of the athletes I was competing against are full-time athletes. My actual goal was set at coming fifth which would put me best of the rest, so to come third was a real surprise.

“It feels really good to look back at all the sacrifice and hard work I’ve put into my training over the last couple of years and see that all that hard work has paid off with a medal.”

The 40-year-old, who hails from Padua but has taught at UCLan’s Preston Campus for three years, has now represented his country at four Deaflympics.

"I feel extremely happy to have come third as some of the athletes I was competing against are full-time athletes. My actual goal was set at coming fifth which would put me best of the rest, so to come third was a real surprise."

He said: “There were many challenges for this event, one of which was to make sure that I went into the Games at peak fitness and timing it right. Also I wasn’t familiar with the type of topography that I would be competing in.”

Luigi had his first taste of the sport, which involves navigating as quickly as possible between set points while using a map and compass, while he was at school but developed his interest while he was a student at the University of Padua.

Since joining UCLan he has become a member of South Ribble Orienteering Club and often uses Preston’s Avenham Park as a training location.

Luigi, who has also represented his country in European and World Championships, added: “I’ve been able to combine my teaching and orienteering as I do most of my training in the evening and the competitions that I’ve been involved in are usually at a weekend.

“My family, friends and colleagues have been wonderful. They’ve really supported me over the years and now everyone is really happy for me.”

The Deaflympics take place every four years and feature 21 sports. The 23rd Deaflympics took place in Samsun, Turkey, in July and featured nearly 3,100 athletes from 97 countries. 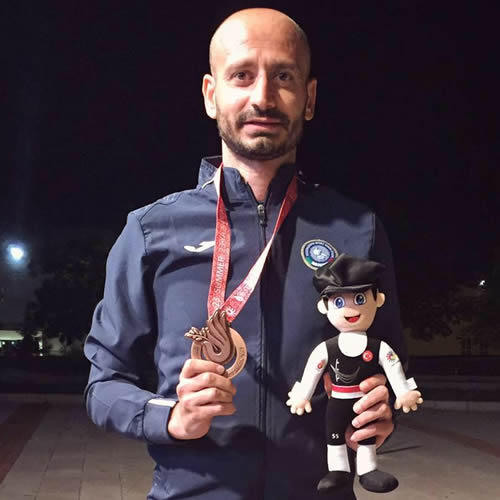