A young mum-of-two from Blackpool overcame a personal tragedy to gain a first-class honours degree from the University of Central Lancashire (UCLan).

Caitlin Tattersall, 28, battled through her degree in social work with support from family and UCLan tutors after her five-year-old son, Kaden, lost his fight against systemic onset arthritis in November 2016.

After two years of investigations, Kaden was finally diagnosed but medics failed to pick up on his life-threatening condition until seven weeks before he passed away - instead sending him home with pain relief.

Gaining As and Bs in her A Levels at The Blackpool Sixth Form College, Caitlin began to study sport and exercise science at Loughborough University.

But following the death of her mother, Caitlin decided not to return as she was struggling to come to terms with what had happened. Instead she chose to pursue her dream of becoming a social worker, embarking upon a course at UCLan.

Caitlin explains: “As a single mum-of-two, I wanted to set an example for my children to show them that no matter what age you are, education is important for your future.

"I’ve lived on council estates in Bolton and Blackpool throughout my life, which has made me aware of the stigma attached to this, but I believe that with hard work and dedication you can achieve anything which is why I chose to return to education at the age of 25."

"As a single mum-of-two, I wanted to set an example for my children to show them that no matter what age you are, education is important for your future."

She added: “My first year at UCLan was tough as I applied through Clearing and didn’t get a place at the Preston Campus. Luckily, I was offered a space at UCLan’s Burnley Campus when I expressed how determined I was to start the course immediately.

“There was a lot of travelling on public transport, but I had set my heart on a degree in social work so that I could make a difference and I didn’t want to give up on my dream – this was my second chance.”

In Caitlin’s second year, things became easier as she undertook a placement at the Fylde Coast Women’s Aid which is located close to Blackpool. However, it was at this point Kaden’s condition flared up and hospital appointments became a regular occurrence.

Caitlin added: “When we finally had a referral appointment at Alder Hey Hospital in Liverpool, Kaden was very weak, but he was determined to get better.

“Within days of Kaden receiving treatment, he seemed to be on the road to recovery – he even walked down the corridor which was a first in months of crippling pain leading up to this stage. It wasn’t long after that when Kaden sadly died of sepsis as a result of his arthritis.” 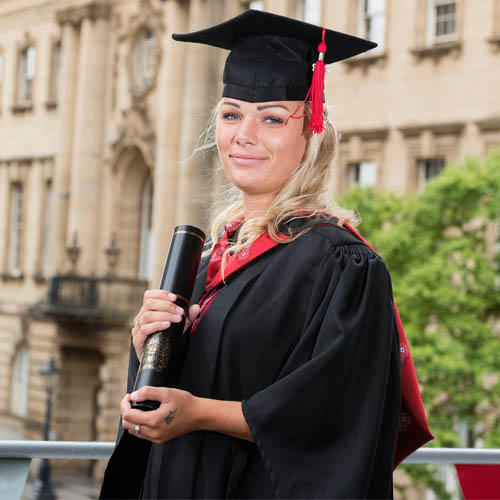 "When we finally had a referral appointment at Alder Hey Hospital in Liverpool, Kaden was very weak, but he was determined to get better."

Heartbroken, Caitlin knew she couldn’t give up on her dream of being a social worker and in the January, following Kaden’s death, she continued to study at UCLan and undertook the remainder of her work placement outside of class time to make up for the hours she had lost.

She said: “I used January 2017 as a turning point and a fresh start to get back on track; nothing will ever help me get over what happened to Kaden, but I had to be positive for my daughter - Kaden’s sister, Taylor - who was so brave throughout.

“I’d like to thank my family, UCLan and the Fylde Coast Women’s Aid who gave me the support I needed to get through an extremely difficult time in my life. I hope to go on and make a difference to those who need it the most.”

Looking forward, Caitlin is hoping to undertake the Assessed and Supported Year in Employment which will mean she will no longer be ‘newly qualified’ and will also gain postgraduate credits, in addition to securing a role as a social worker.