Are you barking mad? First TV remote for dogs is created

Remote allows dogs to change channels and interact with TV

A prototype of the first ever dog TV remote with extra-large buttons for clumsy paws has been created by experts, allowing dogs to control the TV when their owner leaves the room.

Pet food brand, Wagg, has been working closely with Ilyena Hirskyj-Douglas, PhD Researcher in Animal Computer Interaction Design at the University of Central Lancashire (UCLan), to develop the prototype which will allow canines to control the TV for the first time.

Dan Reeves, from Wagg, said: “We know that people can feel a little guilty about leaving their dogs in a room alone for a short while, whether it’s to pop to the shops or cook dinner in the kitchen, so we wanted to create something that would keep the dog entertained and reassure owners of their well-being. Dogs are a key part of family life so, why shouldn’t they get to choose what to watch on TV every now and then, just like the rest of us?”

The remote marks the next step in the growing trend of animal computer interaction (ACI), which has seen many pet-focused apps and interactive toys launch over the past few years.

"Recent research found the average dog now watches more than nine hours of TV a week, showing that technology is already playing a huge part in our pets’ lives."

Ilyena Hirskyj-Douglas said: “Recent research found the average dog now watches more than nine hours of TV a week, showing that technology is already playing a huge part in our pets’ lives. A TV provides an interactive space which allows dogs to have a source of entertainment, particularly when its owner is out of the room.

“We’ve had to take into account many different factors when designing the remote. For example, although dogs generally have a 240 degree vision, they have fewer colour sensitive cones than humans, which results in them being red-green colour blind. To address this, we’ve made sure the remote is blue and yellow as dogs are most receptive to these colours.”

The prototype is used in a similar way to a normal TV remote and is made of a hard-wearing waterproof plastic. It includes:
• Large paw-friendly buttons with raised surfaces to avoid paw slippage
• Yellow and blue colours as these are preferred colours for dogs
• Squeak-like sounds that omit a lower-intense frequency and appeal to dogs
• A hole to attach a rope toy for the dog to interact with and carry the remote

The model remote is currently being trialled with a specialist panel of pooches, with experts monitoring their reactions to the buttons, sounds and colours. Following the analysis stage, Wagg will approach tech companies with a view of putting the model into mass production. 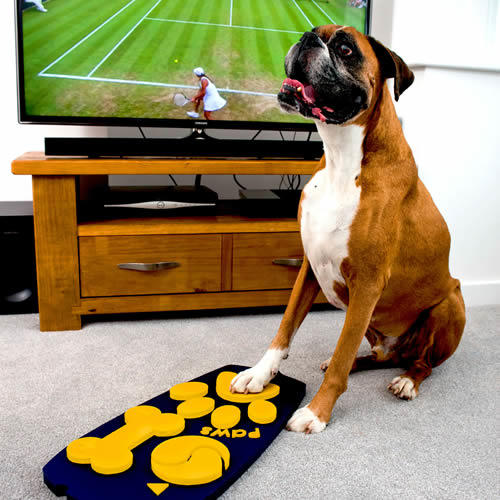 Rocky the boxer (pictured), who is taking part in the trial

"Recent research carried out by Wagg, looked at the extent to which television plays a part in the lives of our dogs - with a staggering 91 percent of owners admitting their pet regularly sits on the sofa and watches TV with them."

Rachael Webb, owner of Rocky the boxer (pictured), who is taking part in the trial said: “After a bit of initial sniffing and licking, Rocky really engaged with the remote. After seeing it in action, I would definitely be reassured leaving him in a room with the remote to entertain him and keep him occupied.”

Reeves added: “Recent research carried out by Wagg, looked at the extent to which television plays a part in the lives of our dogs - with a staggering 91 percent of owners admitting their pet regularly sits on the sofa and watches TV with them.

“At Wagg, we believe that dogs are integral to special relationships, particularly within the home. We know that TV brings people and pets together and we’re really pleased with the initial prototype. We hope other dogs enjoy it as much as Rocky has!”

The prototype design has been commissioned by Wagg to mark the launch of Dogglebox, a one-off spoof specially created for YouTube with a completely canine cast. The video sees pooches of all shapes and sizes parody the Channel 4 laugh out loud TV show, Gogglebox.