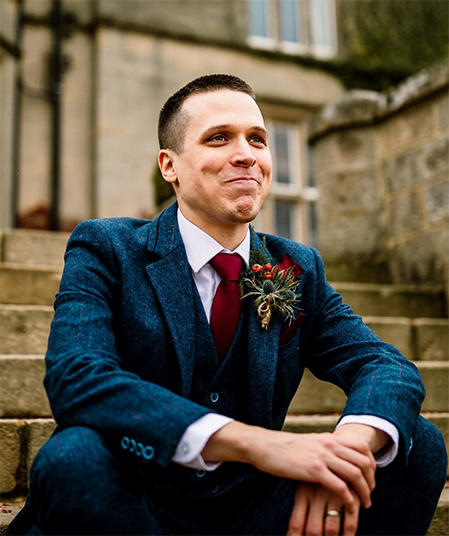 After visiting our Open Day. Adam thought that UCLan's physics offering really stood out because of the outstanding specialist facilities at our Preston Campus, such as our Physics Labs and Alston Observatory.

Adam was enthralled by the tutor's subject passion and UCLan's good reputation for astrophysics, as well as being reassured by the fact that first year students are guaranteed time in the labs and observatory - something that not all universities can offer. Furthermore, Adam was impressed to learn about UCLan's excellent links with other institutions such as the European Space Agency (ESA) and the South African Astronomical Observatory.

"I was really impressed by my course's open day. The academic staff were lovely, I felt like they really wanted me to choose UCLan"

During his first couple of months at UCLan, Adam felt like the course was living up to the high expectations that had been set at the open days. The content was inspiring, and he felt like his tutors saw him as a person rather than just a grade or statistic.

Unfortunately, during one of his summer breaks, Adam injured his back whilst rock climbing. He was bed-bound for almost three months and was worried that his injuries would affect his performance at University. However, Adam received tremendous support from his tutors and, on recovery, returned to campus and successfully passed the year.

Speared on by what he had learnt as an undergraduate student, Adam decided to extend his time at UCLan by enrolling on a PhD course, completing research alongside Professor Victor Debattista on 'The Effects of Radial Migration on the Outskirts of Disc Galaxies'. In short, he used simulations to look at how stars interact with the spiral arms in galaxies, looking for evidence of a 'mixing effect' where stars move around a lot in a galaxy.

Although Adam said his research was one of the hardest things he has done, he thoroughly enjoyed it, and it has created a solid foundation for a career in science.

"I enjoyed the PhD very much. It was very hard work (the hardest thing I've ever done), but I'm glad I persevered. I had great support from Victor and the rest of the department, and I still look back fondly on that time (the weekly donut meeting certainly helped)."

After finishing his PhD, Adam got a job at UCLan's Jeremiah Horrocks Institute, providing admin support to other research students. He then joined the Civil Service as an Operational Researcher and has progressed to a specialised data science-based role, where he uses predictive analytics techniques to predict customer behaviour.

We asked Adam for a highlight of his time at UCLan. He spoke about the fully funded trip to South Africa where his cohort observed on an 18-metre telescope. It was an excellent opportunity to discover the specialist physics research equipment used across the globe. Adam also got the chance to participate in a series of outreach talks to disadvantaged children.