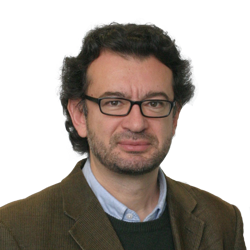 Victor teaches modules around the Milky Way and galaxies in general. His research expertise is in the dynamics of galaxies and how this informs their formation and evolution. He uses high performance computer simulations to help understand their behaviour. His research has been funded by the Science and Technology Facilities Council, the Royal Society and the EU COST Association.

Victor has published extensively on the dynamics of disc galaxies, including the Milky Way, which is being studied in great detail by the European Space Agency's Gaia satellite. His research interests cover bulges and bars, spirals, bars, warps and the chemistry of discs. Victor has supervised or co-supervised 11 PhD students and 4 PDRAs at UCLan. Victor also organises public outreach activities, including the popular seasonal Jeremiah Horrocks Public Lecture Series, which has been attended by thousands of members of the Lancashire community.

Victor earned his PhD at Rutgers University on the interaction of baryons and dark matter. His pioneering work showed that the rate at which bars rotate constrains the amount of dark matter that is present at the centres of galaxies. This work continues to be debated and discussed more than 20 years later. After Rutgers, Victor spent time as a postdoc in Switzerland, first at the University of Basel, then at ETH Zurich, before moving back to the USA for a Brooks Prize Fellowship at the University of Washington in Seattle. It was during that time that he started working with his former PhD student Rok Roskar on stellar migration. Their work brought the subject to the attention of the astronomical community and is one of the touchstones of our current understanding of disc galaxy evolution. After Seattle Victor moved to UCLan as an RCUK Fellow in 2007 where he has been ever since. During his time at UCLan he has worked on the nuclei of galaxies, on the formation of bulges, and the formation of the thick disc. His work increasingly focusses on our home galaxy, the Milky Way. Students Victor has supervised in research have been awarded Marie Curie and Hubble Fellowships, as well as the Chinese Academy of Sciences President's Special Award. During his years at UCLan he has organised two international conferences, and four focussed workshops. Victor was promoted to reader in 2012 and to professor in 2018. He has awarded a Visiting Scholar position at the Kavli Institute of Astronomy and Astrophysics at Peking University, and a visiting professor at the University of Zurich.

The galaxy dynamics research group, which Victor leads, uses simulations of galaxy formation to leverage the huge investment being made into studying the Milky Way, in order to understand the evolution, and observed properties, of galaxies in general. As a typical galaxy, the Milky Way is an important benchmark for studying galaxy formation. Uncovering its mass assembly is therefore of great importance to understanding galaxy formation. Several surveys now underway are examining it on a star by star basis. The European Space Agency's keystone mission Gaia is mapping the Milky Way in 3-D with 1 billion stars, while ground-based surveys such as Gaia-ESO, APOGEE and GALAH are obtaining chemical compositions and ages for hundreds of thousands of stars. These complex datasets need state-of-the-art simulations with gas, star formation, supernovae and chemistry (which ensure that models evolve realistically) to interpret properly. Victor have been producing such models to understand how the bar and bulge formed, how the thick disc formed and how stars in the disc are affected by spirals and by warps.