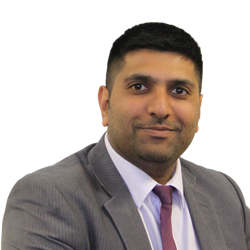 Wajid teaches across all of the Community Leadership programmes from Foundation degree to Postgraduate level. He has particular research in empowering South Asian female mature students to re-engage in Higher Education. He has published in this area and in relation to the South Asian diaspora generally. Wajid has supported numerus former students to become successful in the field of politics.

Wajid Khan served as the MEP for the North West of England from 2017-2019. In the European Parliament, he was a member of the Foreign Affairs Committee and Human Rights Subcommittee. Wajid served as a Special Envoy to Muslim Communities for the S&D Group in the European Parliament. Wajid was awarded the Sitara-i-Qaide Azam Award by the President of Pakistan. This is the Highest Civilian Award, which was conferred by Wajid for his work on International Human Rights. In 2002, Wajid graduated in Law from UCLan. He then worked in the voluntary sector with young offenders, gaining qualifications in advice and guidance as well as mentoring, and teaching homeless young people numeracy and literacy.

In 2004, he completed a Masters in European Law. During this, inspired by the race riots in Burnley in 2001, he initiated several projects involving community cohesion, including the Corrymeela project in Northern Ireland, through which his role gained him a National Cohesion Award in 2004. Whilst studying for his Masters Degree, Wajid worked as a taxi driver to fund his studies. In October 2005, he lectured in Community Leadership. Wajid co-wrote the BA (Hons) Community Leadership, which was validated in May 2006. In September 2006, he was appointed course leader of this programme. He has presented academic papers across Europe at Volunteurope conferences in Berlin, Strasbourg, Warsaw and Genoa. In June 2006, he advised the Russian Ministry of Education and Science on developing youth strategies, and was invited to the Civil G8 in Moscow where he introduced proposals, which were later discussed at the G8 Summit. In October 2006, Wajid was appointed to the Executive Board of Directors of Volunteurope where he served until 2013. Wajid became local Councillor after a landslide victory in the local elections, on the 3rd of May 2007 in the Daneshouse & Stoneyholme ward in Burnley, Lancashire. He was re-elected in 2011 with an increased majority and further won the 2015 election unopposed. He won the 2019 local election with 90% of the vote share. He served as a Cabinet Member for finance from May 2015 until May 2017.

Wajid is currently the deputy mayor of Burnley. In May 2008, Wajid co-wrote the pioneering foundation degree in community Leadership, based initially in a community setting in Burnley. The degree engaged South Asian females academically in a manner, which has never been achieved nationally. Wajid has co-authored publications focused on the youth of Pakistan as we all the Pakistani diaspora. Wajid pioneered relationships with UCLan Forensic Science and the National Police Bureau in Pakistan.