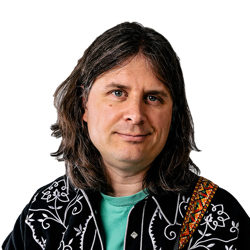 Simon Partridge is a performer, guitarist, improviser, band musician, workshop leader and music educator. He has twenty years of experience working with students at undergraduate and postgraduate level. He continues to provide vital interface between academia, the music industry and the wider artistic community.​

Simon currently leads and facilitates modules combining practical, theoretical and vocational aspects across the BA and Masters in Music courses. Alongside live music and grassroots venues, he champions interdisciplinary practice e.g. annual collaborations with UCLan Dance. He supports his students in forming and maintaining networks vital to their artistic and professional development and are constantly working with venues, industry professionals and practitioners from other disciplines to build their skills, experience and careers.

He is currently studying for a Professional Doctorate through his research into group musical improvisation. Since 2013 he has lead the Cold Bath Street Band - practice-led research into group improvisation. This project involves current students, alumni and external artists from China, America, Canada, France and Hebden Bridge. As well as performing and delivering workshops regularly, the band has released three albums and is signed to the our UCLan Recordings label. Further information at www.coldbathstreet.com. ​

In 30 years as a professional musician Simon has performed and recorded nationally and internationally whilst also maintaining passionately his belief in the importance of and involvement with local community music.

Following initial training at Huddersfield Technical College, his practice initially developed within progressive rock groups which lead to him being signed at 22 and working internationally through an independent label. Looking to further develop beyond these boundaries brought him to academia, where he was tutored and mentored by leading arts educator Colin Murrell. Following his undergraduate study, Simon pursued work as a commercial videographer where his self-employed work was supported by the Princes Trust.

Simon was asked to return to UCLan to tutor in Contemporary Music in 2001-2. Alongside working at Preston campus he also worked at Burnley College under the mentorship of chair of the UCLan Creative Practice Research Academy Dr Les Gillon and helped in writing and delivering the Foundation Degree in Music. Alongside his teaching work, he developed and maintained a highly successful club and corporate entertainment profile which fuelled his work with students.

Since 2014 Simon's artistic work and subsequently his research, has focused on group improvisation including regular live performances, recordings and workshops including facilitating regular sessions with Philip Morton of the Improvisers Network. His group Cold Bath Street have worked with artists including Carl Palmer (ELP), Chris Corsano and Damo Suzuki. Their latest album 'Return to Earth' (2019) was released through UCLan Recordings. https://open.spotify.com/artist/0sv0UBMS1ohhormOkltAHb?si=2MW3aBGdT0CIJ4twvc6OpA
Alongside Cold Bath Street Simon has maintained regular collaboration with other artists including The Terry Logan Band (2013-16), Fire Tower 4 (2017-present) and producer Paul Hutchinson. He has acted as consultant for Matamp and for guitar designers Brian and Michael Eastwood.

Outside of music, Simon produced 'Liverpool Labour Police Striker', a short film documenting the aftermath of the 1919 police strike which was screened in Liverpool, Salford and Preston.

The Cold Bath Street Project undertakes research in the field of group music improvisation by means of reflective practice. The significance of this project lies its decentring of the traditional concerns of music theory, technique and genre convention in favour of enquiries into the functionality of the ensemble’s shared creativity with its dynamics of interaction, shifting hierarchies and the complex role of the director-researcher conducted from within the practice and largely via the language of music.

The research outputs are intended to be of value to musicians, academics in the field of music and music educators across the whole range of experience levels. A practice-based methodology is employed; the extended period spent working with a single group giving opportunity to study the developing qualities of improvisational practice over time, identifying and addressing the group’s subjective needs. This project draws on Nachmanovitch (1990 & 2019) in its premise that successful improvisation will not be achieved solely by learning extensive vocabulary on a given instrument and on the work of Borgo (2007) and Cobussen (2014) in centrally considering the ecology of the improvisational group environment. Pivotal to the project has been developing strategies to engender an environment of heightened awareness and of active listening in which what Csikszentmihalyi (1990) defines as ‘flow state’ wherein new ideas can be formed, sustained and developed.

Interdisciplinary collaborations with poets, dancers, visual artists and film makers are used to seek new ways to interact, stimulate ideas and produce form collaboratively. Practice runs in parallel with reflection, player interviews and contextual study, all of which then feed back into the devising of interventions for subsequent sessions.