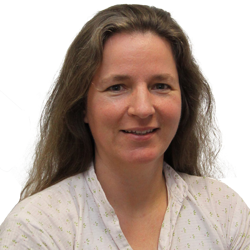 Ulrike is Professor of Sign Language Linguistics and Co-Director of the International Institute for Sign Languages and Deaf Studies (iSLanDS). Her team has pioneered research in the comparative study of sign languages worldwide, and in the multilingualism of deaf sign language users. Ulrike is also Co-Director of the transdisciplinary Institute of Citizenship, Society and Change. She is a member of the European Academy of Sciences and has been awarded an Honorary OBE.

Ulrike is committed to supporting deaf people both as staff and as research degree students at the iSLanDS Institute. Over the years, she has supervised MA by Research, MPhil and PhD projects undertaken by deaf people from Uganda, India, Japan, Israel, Turkey, and the UK. She has held several major grants from funders including the Economic and Social Research Council and the European Research Council. As Co-Director of the Institute of Citizenship, Society and Change, Ulrike’s role has included the launch of a research satellite called AlterNEXT, which is located on an eco-village campus in rural eastern India. She has also pursued her interest in developing Serious Games for facilitating work with diverse stakeholders from different societal sectors, such as NGOs, public services, and academia.

Before coming to the University of Central Lancashire, Ulrike headed a research group on the comparative study of sign languages (Sign Language Typology) at the Max Planck Institute for Psycholinguistics in the Netherlands. Her theoretical research is grounded in many years of fieldwork, particularly in India and in Turkey. In line with the mission of the iSLanDS Institute, Ulrike’s work combines sign language research with community capacity building. Since 2008, she has been involved in various initiatives for the development of training curricula and the implementation of training programmes with deaf learners in Ghana, Uganda, India, and Turkey. The iSLanDS team also created the SIGN conferences, a series of international conferences of sign language users. Together with Indian partners, Ulrike and her colleagues developed and implemented India’s first BA in Applied Sign Language Studies, a unique programme that graduated students from 10 different countries in Asia, Africa, and Latin America until 2015. Since then, her applied research has focused on literacy and deaf peer education in countries of the Global South. As a result of her work on endangered sign languages in small-scale rural communities, Ulrike worked as a consultant for UNESCO's Atlas of World Languages in 2017. Since 2017, Ulrike’s role as Co-Director of the Institute of Citizenship, Society and Change has initiated a re-focus on transdisciplinarity in her work. Her 2020 book details the development and use of Serious Games in her work. Serious Games are games that are used for purposes other than entertainment, for example in educational contexts or in co-creative meetings and workshops. Moreover, through the research satellite AlterNEXT in India, a UK-Indian team is experimenting with co-creative workshops on sustainable agriculture and with innovations in education, based on work at a local primary school for deaf children. Ulrike is editor-in-chief of the Ishara Press, a social enterprise in the UK. She is also co-editor of the Sign Language Typology series and the Sign Languages and Deaf Communities series by De Gruyter Mouton and Ishara Press. In 2014, Ulrike was elected to the Academia Europaea (European Academy of Sciences). In 2015, she was awarded an Honorary OBE for “services to Higher Education and international deaf communities”.

Ulrike's major research projects have been funded through UK research councils (AHRC and ESRC), the UK Department for International Development, the European Science Foundation, the European Research Council, and the British Council. Sign Language Typology, the systematic comparison of the structures of dozens of different sign languages from around the world, has been one of Ulrike's main research interests. In collaboration with international colleagues, this research has covered areas such as negation, questions, possession, kinship terms and quantification. A related research strand has focused on the documentation and analysis of sign languages in non-Western countries, including endangered sign languages in rural communities with hereditary deafness. Small-scale rural sign languages have many unique properties not found in the better-known urban sign languages. This research led to a collaboration with UNESCO on the Atlas of World Languages. In the years 2011-2016, Ulrike's research on the multilingual behaviours of sign language users (Sign Multilingualism) was funded by the European Research Council.

Work arising from this project has been published in a series of journal articles including Cognitive Linguistics, Topics in Cognitive Science, and Sign Language & Linguistics. ESRC-funded research since 2015 aims at creating innovative ecosystems of learning with young deaf learners, and to assess the impact on the acquisition of literacy and multiliteracies skills. This involves deaf peer tutors, using sign language as the medium of instruction, learner-created curricula, and bilingual online learning spaces. Research takes place with groups of deaf learners in Ghana, Uganda and India. The research teams, led by in-country deaf research assistants, have been creating documentary films to showcase this work. This complex research setting has been the catalyst for Ulrike's transdisciplinary work on Serious Games. These games are used as facilitation techniques rather than for entertainment, and can play a crucial role in a context with diverse stakeholders, such as deaf community members, education professionals, government officials and NGOs.