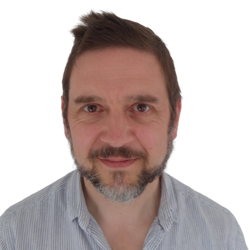 John is a Director of the UCLan Centre for Sustainable Transitions – a research centre that brings together Engineers, Social Scientists and Psychologists to work on the systemic challenges presented by the social impacts of Climate Change. He is also a Director of the UCLan Institute for Citizenship, Society and Change – a collaboration of research strands from four UCLan Faculties into a critical mass capable of extensive transdisciplinary research.

John has worked in a variety of research and practice based roles in the public, private and voluntary sectors – focusing on the interaction between the natural environment and society, particularly seeking to understand the everyday interactions between the natural environment and those within it. This interest has led to roles in the voluntary sector in conservation and community development in a variety of settings. He was successful in a £1m bid to the National Lottery for a community in Cheshire for resident led improvements to the local area. He then later became a Director of Local Trust, overseer of £220M, 15 year resident-led National Lottery Community Regeneration Programme, Big Local.

John’s research interests are varied, but all feed into a broad conceptual understanding of the social aspects of sustainability and the human and community resilience required for the transition to a zero carbon society. This has led to research on community-based transitions, working with communities and people of all ages in the UK that are transitioning to renewable forms of electricity generation from livelihoods based on traditional industries that have now disappeared or are declining in the UK – such as the coal and nuclear industries. His recent work has focused on working with young people from disadvantaged communities in the UK to Forest Communities in Africa, that face daily challenges on many fronts. John uses transdisciplinary and arts-based methods to generate new knowledge on community resilience. John is lead Editor of the recent (2019) Routledge Energy Series book “Governing Shale Gas: Development, Citizen Participation and Decision Making in the US, Canada, Australia and Europe”. The book contains chapters from international academics and practitioners on the uneasy relationship between large energy infrastructure developments, community participation and issues of social justice. John’s group at UCLan also held the Horizon 2020 research grant, “History of Nuclear Energy and Society”, led by Pompeu Fabra University in Barcelona with academic partners from across the EU. He led the social science work packages with his Spanish counterpart and has carried out history and social science research on the development of the relationship between nuclear energy and society in 23 countries over the last 60 years.