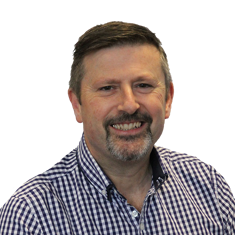 Ian has previously completed 30 years of service in Policing and brings that experience to his leadership of the academic team who deliver a wide range of policing-related undergraduate and postgraduate programmes. He teaches on counter-terrorism, critical incident decision making, police-use of firearms police-community relations, performance management and leadership skills. Ian is a Fellow of the Higher Education Academy and a founding member of the British Society of Evidence Based Policing.

Ian is the Principal Lecturer and Academic Lead for Policing, being responsible for the day-to-day leadership of the academic team delivering 4 undergraduate and 7 postgraduate programmes. These include programmes that are part of the College of Policing suite of degree entry options under the banner of Police Education and Qualifications Framework (PEQF) which are currently taught by Ian’s team in two northwest police forces. He is a Fellow of the Higher Education Academy and also teaches on several programmes, specialising in counter-terrorism, decision-making, performance management, and leadership. He is also engaged in research for his Ph.D. examining how mutual trust is created in police-community relations and how research knowledge is translated into approved professional practice in policing.

Ian came to academia in a full-time role in 2017 having completed 30 years of a policing career with Greater Manchester Police (GMP). His policing experience covers a range of command and leadership roles within operational policing whilst also being a specialist in the tactical command of firearms operations. Ian has also held non-operational roles where he provided leadership to the function of criminal justice partnerships with GMP, performance management at an organisational level, and the development of police-related research and relationships with academia. He was awarded his Master’s degree in Applied Criminology from the University of Cambridge in 2011 during which time he discovered a passion for the relationship between scientific knowledge and the practice of policing. He was a founder member of the British Society of Evidence-Based Policing and his Master’s thesis which tested the receptivity of UK Policing to evidence-based practices was requested by the College of Policing for inclusion in their national library and cited in Evidence-based policing: Translating Research into Practice (Koper and Lum, 2017. Oxford University Press). He subsequently repeated his Master’s research in 2016 to report on changes in the relationship between police officers and research evidence, which was subsequently published in the International Journal of Police Science and Management. Ian was a regular guest lecturer at UCLan between 2014 and 2017 and took a full time lecturing role in February of 2017 specializing in counter-terrorism. His research interest in this area includes police-community relationships to support non-traditional counter-terrorism methods, the manifestation of radicalisation, its relationship with organised religions, and critical incident decision-making. In March 2019 Ian was appointed as Principal Lecturer and Academic Lead for policing which has allowed him to bring his previous leadership experience to the benefit of the academic team at a time of significant development and opportunity within the field of policing. As the chair of curriculum development groups within two north west police forces, he is able to exercise his passion and positive influence in helping to reduce the gap between academia and policing.