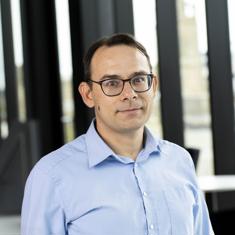 Georgios is a Lecturer in Civil Engineering at University of Central Lancashire and Honorary Associate Professor at University of KwaZulu-Natal (UKZN), South Africa. He has significant research experience in structural engineering/computational mechanics. He has participated in several research projects, has supervised PhD and MSc students and has published several articles in international journals, proceedings and book chapters. Georgios has also significant teaching experience. He has received two Best Lecturer awards (UKZN).

Georgios is active in several research efforts which focus among others on data-driven structural mechanics, multi-scale computational homogenisation for composite materials, numerical modelling and optimisation of graphene and carbon nanotube reinforced nanocomposites as well as simulation of structures under fire actions. Other research interests include investigation of the structural response of masonry arches and buildings. Georgios has developed non-linear finite element analysis codes. He has also extensive experience with commercial finite element analysis software (Abaqus, Ansys, Comsol).

He is the first co-author, among two, in a book on Nonlinear Mechanics for Composite Heterogeneous Structures (CRC Press, Taylor and Francis, in preparation).

Currently, he supervises PhD and MSc students and he participates in international collaborations. His teaching activities in UCLan include Civil Engineering Materials, Advanced Structural Engineering and Design. Georgios is keen to collaborate with new MSc and PhD students.

After completion of his PhD studies, Georgios worked for 3 years in industry as structural engineer (2007-2010). In 2012 he was awarded a post-doctoral scholarship, to conduct research in computational mechanics. His post-doctoral studies were held in the Continuum Mechanics Institute, at Leibniz University of Hannover, Germany (2012-2014) and at Technical University of Crete, Greece (2014-2016). In 2016 he was appointed Senior Lecturer at University of KwaZulu-Natal (UKZN) in Durban, South Africa. In 2019, he was promoted to Associate Professor. Since October 2020 he holds a Honorary Associate Professor position at UKZN.

Since November 2020, Georgios has a Lecturer position, at University of Central Lancashire (UCLan), UK. Georgios is the organizer and head of the Structural Engineering and Computational Mechanics group (SECM, UKZN). He also serves as a reviewer in various scientific journals.

The framework of three ongoing research efforts are presented below.

a) Fusion of data mining and computational mechanics is a modern approach for the exploitation of available data within rigorous modeling. First steps in this direction have been focused on the usage of neural networks and other soft computing tools as metamodeling tools. This framework seems suitable for numerical homogenization techniques, where the lower-level analysis of a detailed Representative Volume Element (RVE) is replaced by a prediction based on a previously prepared database. Numerically prepared data are used here, although the method can be used with experimental data as well. In this case, the need for a constitutive description of the fine scale is bypassed, leading to data-driven analysis. Extraction of material properties from the database, required by the upper-level finite element analysis, can be based on backpropagation artificial neural networks. The method is applicable to composite materials and masonry structural systems.

c) Optimal design and analysis of graphene/fibre reinforced laminated nanocomposite plates with respect to maximizing the fundamental frequency or minimizing the weight is studied using numerical modelling and optimization. Optimal design solutions are given for different sets of design parameters. Purpose of this approach is to assess and compare different levels of optimization by means of a design efficiency index and as such to determine the effectiveness of different design parameters in maximizing the fundamental frequency or minimizing the weight. Optimization is implemented using a Sequential Quadratic Programming algorithm and the mechanical properties of graphene/fibre nanocomposite are determined via micromechanical relations. Vibration analysis is conducted by the finite element method using four-noded Mindlin plate elements. Results are obtained for simply supported (SSSS), clamped (CCCC) and simply supported-clamped boundary conditions for opposite edges (SCSC). It is observed that non-uniform distributions of graphene and fibre as well as fibre orientations are quite effective in improving the design efficiency.