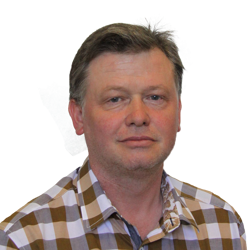 Tim teaches within the Jeremiah Horrocks Institute for Mathematics, Physics & Astronomy, predominantly in the area of experimental/applied physics. He leads the Magnetic Materials Research Group at UCLan and sits on the UK and ROI Institute of Physics Magnetism Group Committee. His interest and publications are focused on the study and characterisation of interactions within, and between, magnetic materials and their structures, including development of experimental techniques. In addition to the supervision of students at PhD, Masters and BSc (Hons) levels, his experience includes being an External Examiner for UK Physics degree programmes.

Tim has either taught or contributed-to physics modules over undergraduate years 1 to 4 and also has experience teaching 1st year mathematics to engineering and building services students. He is the Module Leader for the 1st year physics laboratories that includes the development of both programming and group-work knowledge and skills in addition to a suite of physics experiments. He leads and co-ordinates the annual Physics Challenge undertaken by teams of 1st year students in competition with one another and, whenever possible, with other Universities. He supervises PhD and Postgraduate Masters research projects in physics, authoring peer-reviewed articles in magnetic materials based research and collaborates on / co-supervises with chemistry-based projects that involve the study of magnetic nanoparticles.

On leaving secondary school education, Tim joined the Royal Air Force (RAF) as an Apprentice Technician. Completion of his apprenticeship included study for a B/Tec Higher National Diploma (HND) in Aerospace Studies (Avionics) and qualified him as an Electronics Engineering Technician Air Communications / Air Radar. He continued in the Aerospace sector for the early part of his career, becoming an Engineer and Technician Trainer in avionic systems at British Aerospace, with part of his time spent working overseas in the Middle East. He then undertook a major career change by returning to full-time study for the first time since leaving school, completing his first degree in Applied Physics & Astronomy as a mature student. Following his final year project that involved developing control programmes and measuring properties of magnetic recording media, he caught the 'magnetic material' bug and went on to study for a PhD. Postgraduate and postdoctoral work at UCLan, Southampton and Liverpool followed, with his first paper published from work at Southampton on materials that exhibit a then newly discovered property known as Colossal Magnetoresistance (CMR). After a short period back in industry, as a Software Engineer building LabVIEW test tools for an aerospace defence contractor, Tim returned to the University sector in a number of teaching and academic-related roles before he secured his current position as a physics lecturer in the Jeremiah Horrocks Institute for Mathematics, Physics & Astronomy. In his time since becoming a physics lecturer he has been Course Leader for all the on-campus undergraduate Physics and Astrophysics degree programmes and successfully steered these programmes through Professional Body Accreditation by the Institute of Physics (IOP). He has also been an External Examiner for the physics degree programmes at the University of Portsmouth and an Honorary Visiting Senior Fellow at the University of Liverpool. He currently sits as an Officer (Treasurer) on the IOP Magnetism Group Committee.

Tim's research was originally based on the study of magnetic materials used in advanced data storage applications. This included using noise as a probe of the structures and interactions within magnetic assemblies of nanoparticles and in the study of magnetic fluids used as precursors for data storage tapes. His current interests have widened to include three main themes: (i) Multiferroic composite materials: These materials consist of at least two layers; namely a piezoelectric ceramic bonded to a magnetic layer. The magnetic layer has a property known as Magnetostriction, in which a change of shape (and hence its dimensions) is brought about by the application of a magnetic field. As this is bonded to the ceramic it applies a stress that strains the ceramic layer and causes a change in electric polarity across it and thus a change in voltage. This is the same effect brought about gas/cooker lighters containing piezoelectric crystals, although in that case the change in shape and subsequent voltage brought about by manual pressure/stress causes a spark to jump across a gap and light a flame. Having both magnetic and electrical properties opens up exciting areas of study for potential applications such as energy harvesters, high frequency inductors and memory devices.

Tim's particular interest is in a property known as anisotropy that may be induced into the magnetic layer by orientation of the crystal structure into a given direction. This 'texture' in the layer leads to multiple and tuneable magnetic axes (a mix of relatively easy, medium and hard magnetic axes) and so provides a method of 'tuning' the response of the material to different needs by simply reorientation of the applied magnetic field.

(ii) Magnetic nanoparticles: magnetic particles at the nanoscale (for context, 1 mm contains a 1000 micrometres or microns and 1 micron contains 1000 nm) behave differently than they do in the bulk material. Iron oxides at the scale of nm typically exhibit a property known as Super-para-magnetism and are commonly described as Superparamagnetic Iron Oxide Nanoparticles or SPIONs. In essence this means that with no magnetic field applied they 'appear' to be non-magnetic and do not magnetically interact with one another. However, they do become quickly magnetised when placed in a magnetic field and this makes them ideal for use in biomedical applications by effectively being able to turn off and on their magnetic properties. The surface of the SPION can be 'functionalised' by coating with other materials, e.g. silica, or lipids, that can carry, say, an anti-cancer drug which can then be targeted to the site of a cancer tumour by a magnetic field. Another magnetic property known as hyperthermia also has the potential to kill targeted cells by applying a varying (AC) magnetic field to SPIONs at the site. The particles heat under an AC field, thereby raising the temperature to a point that it kills the targeted cells. Other uses include enhancing the contrast of images in an MRI scan and in cleaning-up pollutants by targeted attachment to a given pollutant before separation using the magnetic field. The synthesis of these composite particles and understanding the poorly understood magnetic hyperthermia effect are Tim's current focus in collaboration with materials science based projects run by colleagues from the Chemistry department, Dr Tapas Sen and Prof. Subrayal Reddy.

(iii) Magnetic Skyrmions: These can be thought of as magnetic 'islands' or features formed by alignment of magnetic moments into a topological 'hedgehog' (think of a circle of hedgehog spines pointing up from a surface) or 'chiral' (think of the spines in a spiral shape). Skyrmions can be formed on the nanoscale and moved by application of an electrical current and therefore have potential applications in data storage and memory. This is a new area for Tim and is led by fellow Magnetic Materials Group member, Dr. Serban Lepadatu.