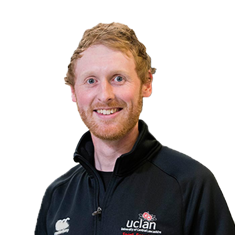 Robert teaches across a range of undergraduate and postgraduate modules within the area of Sport & Exercise Science. Having completed an undergraduate degree in Sport Technology and a PhD on the effects of ankle protectors on lower-limb kinematics of association football players, both at UCLan, he has a keen interest in the development of equipment to reduce the risk of injuries in sport. His main research area focuses on ankle inversion injuries, but his wider interests in sport technology and engineering have led him to be involved with equine surface testing amongst other projects.

Aside from his responsibilities to teaching Robert is involved with the UCLan SENS consultancy which offers a wide range of testing services to athletes. He is an active member of the Athena Swan self-assessment team for the school as well as the college liaison for the department and is also involved with public engagement events run by the University.

Roberts love of sport and science from an early age put him on the pathway to his current position. During college he was awarded a scholarship to attend NOVA college Haarlem Netherlands. It was here he developed his love of Sport Technology and upon returning to the UK set his sights on studying Sport Technology at University. He graduated from UCLan in 2009 with a BSc in Sport Technology and then spent some years working as a full time Madscientist before deciding to further develop an idea to reduce the risk of ankle inversion injuries in football. Robert started a part-time PhD at UCLan in 2012 whilst also working to help develop running trainers for a company based in Leeds. Robert was taken on full time by UCLan in 2013 to run the Biomechanics, Physiology, and Nutrition labs based in Darwin building. During which time he gained experience teaching on undergraduate modules whilst also studying for a PG Cert in Learning & Teaching in Higher Education. Towards the end of Roberts PhD he was taken on as an Associate Lecturer before being made a permanent lecturer in 2017.