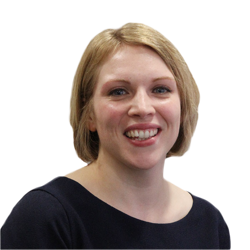 Dr Naomi Krüger is a lecturer in Literature and Creative Writing and author of the novel May (Seren, 2018). Naomi has published articles on the representation of dementia in fiction and specialises in practice-based research including novel-writing, the short story, creative nonfiction and hybrid prose forms.

Naomi teaches across a range of subjects including short fiction, life writing, story shapes, experimental fiction and creative industry projects. In 2017 she helped found the Dinesh Allirajah Prize for Short Fiction in collaboration with Comma Press. This is a prestigious annual writing prize shortlisted by our own undergraduate students.

Naomi’s research into the representation of dementia was part of an AHRC-funded PhD that led to the publication of her debut novel, May in 2018. This was highly commended in the Yeovil Novel Prize and described by Wales Art Review as ‘an ambitious novel that speaks to our times.’ Naomi has published a number of articles about the challenges and possibilities of representing dementia in fiction as well as presenting her research at international conferences. As a writer she has spoken about her work at literary events and festivals including a library tour as part of Dementia Awareness Week. Previous short stories were published in Wag’s Revue, commended in Aesthetica and commissioned by Lancaster Litfest. Other projects and collaborations include co-creating and co-hosting the North West Literary Salon and Stories at the Storey (a monthly true story open mic night) as well as leading writing workshops in collaboration with the Lancashire Archives. Naomi was as an associate lecturer at Lancaster University from 2011-2014.