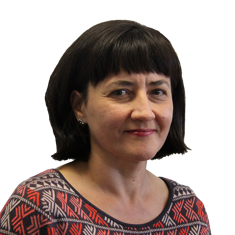 Isabela teaches across a range of subjects in the English Language and Linguistics team: discourse analysis, argumentation and rhetoric, framing theory, pragmatics and cognitive semantics. She has published on practical reasoning, deliberation and decision-making, with application to economic, political and environmental debates. Isabela supervises doctoral projects in argumentation theory, discourse analysis and media framing. Her publications include the monograph Political Discourse Analysis: A Method for Advanced Students (2012, Routledge). Her research interests are in the fields of discourse analysis, framing theory, argumentation theory and the philosophy of critical rationalism.

Isabela is Course Leader for the undergraduate course in English and a Modern Language, as well as (postgraduate) Research Degrees Tutor in the School of Humanities, Language and Global Studies.

Isabela has a PhD in Linguistics from the University of Lancaster (2004), with a thesis on the transition from communism to liberal democracy in Eastern Europe. Until 2010, she was Associate Professor and Course Leader for the MA in Discourse and Argumentation Studies at the University of Bucharest, teaching modules in Critical Discourse Analysis, Pragma-Dialectics, Critical Thinking, Semantics and Pragmatics. She has extensive experience of working as an IELTS and Cambridge Examiner for the British Council (Bucharest, 1997-2008), IELTS Examiner for the University of Manchester (2008-2015) and as EAP (English for Academic Purposes) tutor at Lancaster University (2008-2011). She has taught discourse analysis on doctoral programmes at the universities of Aalborg, Birmingham, Helsinki, Tampere, Napoli and Umea. She has given many invited talks, keynotes and conference papers at international conferences and events in the fields of argumentation theory, discourse analysis and interpretive policy analysis. She joined UCLan in 2011, as Course Leader for the International Foundation Programme, before finally joining the Linguistics team, where she now teaches modules in Semantics and Pragmatics, Media Framing, Discourse, Argumentation and Rhetoric.

Isabela’s publications include 3 monographs and over 40 journal articles and chapters in edited books and handbooks. In her research, Isabela has aimed to reformulate argument schemes for practical reasoning in deliberative activity types from a critical rationalist perspective, i.e. with a focus on criticism, rather than justification. She has developed a deliberation scheme and a profile of questions for the evaluation of practical proposals in conditions of uncertainty and risk, and suggested new ways of defining and representing pro/con (‘conductive’) argumentation. She has studied the contribution made by institutional contexts to rational decision-making and redefined ‘framing’ processes from an argumentative perspective. To enhance the profile of linguistics at UCLan, Isabela has organized various academic events, including the international symposium on Argumentation in Institutional Contexts (March 2017) and the Digital Humanities Workshop (February 2018). Between 2017-2019, she convened the Preston Linguistics Circle (2017-2019), whereby the Linguistics team celebrated 40 years of Linguistics degrees at UCLan.