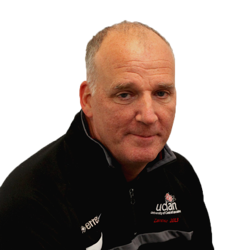 Cliff teaches and leads across a range of modules at both undergraduate and post graduate programmes in Sports Coaching. His area of expertise is in coaching pedagogy, coach development and sport and international development. Cliff's draws upon a wide range of experience in the field that includes Professional Football, Table Tennis and Sport for Development.

Cliff’s professional interest are relatively wide having published and supported national coaching development programmes and presented at national conferences that include the Football National Mentoring Conference at St Georges Park. He is an FA mentor and tutor and supports the development of the FA national mentoring programme In 2009 Cliff set up the University of Central Lancashire Sport for Development Project in partnership with Sport in Action in Zambia which continues today giving students the opportunity to travel to Zambia and work on a Sport for Development project. AS a result of this project Cliff was recognised by UCLan and given an award for his outstanding contribution to teaching and learning. Cliff continues to lead this project in Zambia, providing opportunities for UCLan students to travel to Zambia and make a contribution in some of the most disadvantaged communities in Zambia. https://youtu.be/wPRp5aDUtA8 His main responsibilities are as course lead for the Msc in Sports Coaching but also supervises Doctorial level research students and mentors colleagues enrolled on the teaching programmes at UCLan..

Cliff’s professional; background is in Sports Coaching and development. Initially working for England Table Tennis as a coach and development officer, Cliff eventually progressed, working for a number of Football Academies that include the Preston North End and Blackburn Rovers. He also worked in the US for Major League Soccer coaching and developing soccer mainly in the Boston area. Cliff has also made a significant contribution to develop a range of FA coach education course and support the role out of the FA National Coach Mentoring programme. In 2009, Cliff was appointed on a part time basis by UK Sport to act as a consultant to the International Coach Education System (ICES) as part of the London Olympic Legacy Programme. Cliff continuous to support sport and coach development in his capacity as a senior academic at UCLan and in his personal life where the support local grassroots football coaches through his role as an FA mentor.