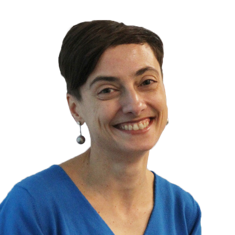 Adina's journal articles were published in Culture, Theory and Critique, China Perspectives, Archiv Orientální and positions: asia critique. She has also published two monographs in Polish, on topics related to Chinese grammar and images of women in Chinese editions of international fashion magazines. She currently acts as Research Degree Tutor for the School of Humanities, Language and Global Studies.

Prior to her job at UCLan, Adina worked as Chinese language instructor and assistant professor at the Jagiellonian University in Krakow, where she taught courses on topics that included: media and cultural institutions in the PRC, Chinese popular culture and nationalism in the early 20th century, popular culture in Taiwan. She spent three years in China with language and research scholarships (Sichuan University, Fudan University). She was awarded a Taiwan Fellowship (Ministry of Foreign Affairs, ROC, 2014) for a research stay at the Institute of Sociology, Academia Sinica, where she spent an additional year as Visiting Scholar in 2017. Adina began her academic career with an interest in the Chinese language, which she perceived from an applied perspective and in a social context. Her MA thesis was devised as a case study in language planning and concerned the implementation of standard Chinese in Chengdu. Her PhD dissertation marked a turn towards popular culture and discourse analysis. It examined the image of women as constructed in articles published in two PRC editions of international fashion magazines – Elle and Cosmopolitan. In recent years, she has been investigating texts that combine linguistic and visual semiotic modes, and has supplemented text analysis with interviews. Her current research interests include: nation branding and public diplomacy in Taiwan; the cultural and creative industries in Taiwan; tourist souvenirs as grassroots nation branding; history and memory in Taiwanese graphic narratives; banal and everyday nationalism in Taiwanese visual culture; Taiwanese TV dramas: family, gender and power; local identity in Hong Kong independent comics.