The University of Central Lancashire’s (UCLan) successful intensive dig on the site of the famous Roman settlement at Ribchester will be shared on tomorrow’s edition of Digging for Britain on BBC 4.

In conjunction with Historic England and Ribchester Museum, UCLan archaeology students from first year through to Masters level spent last summer exploring the north gate of the Ribchester auxiliary Roman fort which is traditionally considered abandoned in AD 370. The UCLan team opened a large trench of 30 meters by 10 meters located just inside the North Gate, opposite the granaries, where it is believed the barracks were located.

Dr Duncan Sayer, Senior Archaeology Lecturer at UCLan, commented: “The long-term project goals are to explore the interior stratigraphy of a Roman military fort from latest to the earliest phase. Last year’s finds included a clay floored building with evidence of use as a workshop in the form of a hearth, kiln fragments, slag, and waste from glass working. The walls of this building had been pulled down leaving fragments of wall plaster across the via Sagularis, an interior road which circumnavigates the interior of the fort, as well as the Via Principals, the central road leading to the centre of the fort. This demolition across two important roadways points to deliberate destruction, but importantly not to abandonment.

“Perhaps Ribchester was not entirely abandoned in the fourth century, instead its internal space changed, the roads became less vital, the barracks had already become workshops which were subsequently pulled down to provide the footings for open spaces and temporary markets. As a result Ribchester can be added to the growing body of evidence for the changing use and composition of fourth century forts.”

The field project is in collaboration with the Ribchester Roman Museum, the Diocese of Blackburn and is funded by UCLan. People can find out more about the excavation, which will continue until 2020 and beyond, by watching Digging for Britain on BBC 4, Thursday 24 March at 9.00pm. 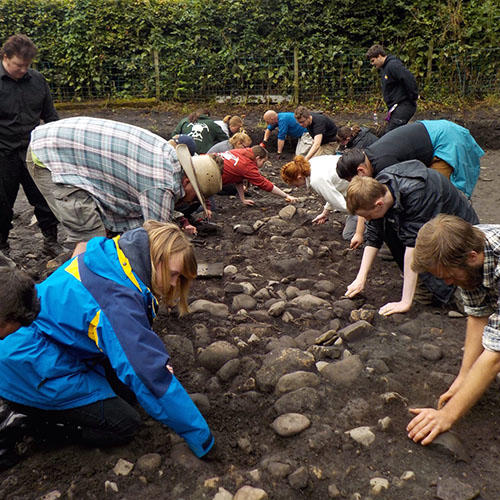