The greatest movie ever made

University astronomers involved in world’s first film of the universe

The world’s first motion picture of our universe, being dubbed the ‘greatest movie ever made’, is to be produced by international astronomers, including ones from the University of Central Lancashire (UCLan).

The film, which could feature dangerous asteroids and uncover some of the mysteries of dark matter and dark energy, will be recorded on a giant digital camera comprising 3.2 billion pixels. It hasn’t been completed yet, but when it is, the Large Synoptic Survey Telescope (LSST) will be the world’s largest digital camera. It will be able to take images of the sky that each cover over 40 times the area of the moon, building up a survey of the entire visible sky in just three nights.

That means billions of galaxies, stars and solar system objects will be seen for the first time and monitored over 10 years. UK astronomers will now play a key part after funding from the Science and Technology Facilities Council (STFC) confirmed the UK’s participation.

"LSST will be one of the foremost astronomy projects in the next decades and the UK astronomical community will contribute strongly to its success. The telescope is being built in the Chilean Andes."

UCLan is one of the universities involved in the LSST Consortium. Dr Victor Debattista, a Reader in Astrophysics at UCLan, said: “LSST will be an exciting facility that will make possible a wide range of studies. Here at UCLan we are coordinating the UK effort at using LSST to understand the formation of the centre of our home galaxy, the Milky Way.”

Steven Kahn, the LSST Director, said: “It is great to see UK astronomers engaging in preparation for LSST, and we look forward to seeing our collaboration develop over the coming years. LSST will be one of the foremost astronomy projects in the next decades and the UK astronomical community will contribute strongly to its success. The telescope is being built in the Chilean Andes. Conditions there are some of the driest on Earth, making it the ideal position for observing.”

When it starts operating, it will generate one of the largest scientific datasets in the world.
The LSST is a ‘synoptic’ survey because it will form an overall view of the universe: billions of objects will be imaged in six colours, spanning a volume of the universe that is larger than any previously explored.

Dr Debattista said: “What is unique about LSST is that each of its images covers a large area of sky to a depth that captures faint objects, and that it takes these images really quickly. That combination of area, depth and speed means that we can do lots of different science with the same dataset.

“LSST will build up a very detailed map of billions of galaxies, with approximate distances to each, from which we will learn about the mysterious dark energy that seems to be accelerating the expansion of the Universe. But, equally, it will look for changes in the sky from night to night; both moving objects, like asteroids, and new ones, like supernovae, that appear where nothing had been seen before. Covering each patch of sky more than 800 times during its decade of operations, it will construct our first motion picture of the universe.” 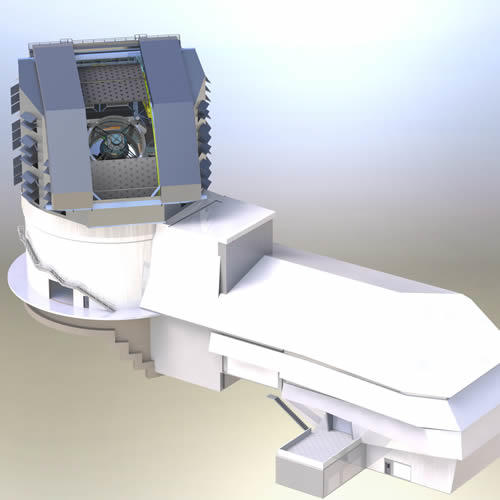 "It will look for changes in the sky from night to night; both moving objects, like asteroids, and new ones, like supernovae, that appear where nothing had been seen before."

Bob Mann, LSST UK Project Leader, added: “Extracting scientific knowledge from LSST will pose major challenges in the management and analysis of data. These ‘big data’ issues are seen across the commercial sector as well as in science, but astronomy provides the ideal testbed for addressing them, as our data is free from the ethical and commercial constraints found in other domains. Many from the generation of young researchers who develop their skills preparing for the LSST data deluge will end up applying their expertise in business or the public sector, so the impact of UK participation in LSST will be felt well beyond astrophysics.”

The benefits of the UK being a member of the LSST extend yet further. The LSST will provide unprecedented access to data, allowing for new kinds of citizen science and discovery. In recent years, the UK-based Zooniverse project has pioneered citizen science investigations of data in astronomy, enabling more than one million members of the public to, amongst other things, classify galaxies, discover planets and explore the outer solar system.

Discoveries made by the LSST will also be used to construct educational materials that will be freely available to schools and the public. The telescope will achieve first light in 2020 and its main sky survey will begin in 2022.