A retired primary school teacher from Dalton-in-Furness has won a national award for her illustration talents.

University of Central Lancashire (UCLan) MA Fine Art student Janet Pickering, 60, is one of 12 illustrators to win the Undiscovered Voices Award, an initiative run by the Society of Children's Book Writers and Illustrators (SCBWI) British Isles to help the publishing industry discover the brightest new talents in children’s literature.

The accolade means Janet’s ‘Pandora finds hope’ illustration will be published alongside the work of other yet undiscovered writers and illustrators in the Undiscovered Voices 2018 anthology that will go on sale across the country.

Janet, who worked at a number of local small schools in Cumbria and Cheshire during her 30-year career before completing a “life-changing” art foundation course at Kendal College and then coming to UCLan in 2016, said: “I am delighted to win this award.  I was food shopping when I got the call to say I’d won so it took me completely by surprise and now I’m absolutely delighted.”

"My dream is to have a second career as an illustrator and hopefully this will open doors for me."

Janet entered the competition after it called for a scene from a well-known myth from anywhere in the world.  After working closely with the UCLan Publishing House on several projects throughout her two-year course, Janet felt like she already had an idea in mind.

“I’d already been asked to draw a menacing illustration for a book, which required me to draw a scene suggesting something sinister without actually showing it” she said.  “I approached the competition in a similar way, suggesting the potential evil lurking in Pandora’s box but also showing a glimmer of hope.  It was all drawn with a graphite pencil and I’m really pleased with the final outcome.”

In addition to being featured in the book, winning the competition means that Janet can also present at an event in February attended by top publishers and agents.

She commented: “My dream is to have a second career as an illustrator and hopefully this will open doors for me.  When I was teaching, I didn’t have as much time as I wanted to draw and I’ve always felt a lot of my talent went unused.  Going back to university and winning this competition feels like I’ve addressed the balance so it’s a very exciting time.” 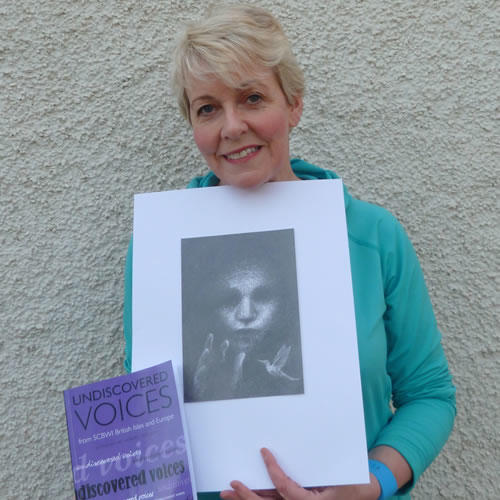 "Janet is an outstanding student who has used her skills to work closely with our in-house publishing team on several projects."

Debbie Williams, Reader and Associate Professor in Publishing at UCLan, originally told Janet about the award.  She said: “It is fantastic news.  This is a national award to showcase what the publishing industry believes to be the most talented, but as yet uncontracted, writers and illustrators of the future.  Janet is an outstanding student who has used her skills to work closely with our in-house publishing team on several projects.  There is usually a fight between publishers and agents to sign up winners so I’m sure Janet has a great career ahead of her.”

Janet, who lives with her husband David, will complete her UCLan MA Fine Art course in September.  She added: “I’m really enjoying it and think it’s very important that older people are encouraged to return to education.  I’ve met new people of all different ages and we’ve learned so much from each other.”

Another key project Janet has worked on is a book called Cold Bath Street, written by bestselling author A J Hartley and set in the tunnels underneath Preston.  This will be launched at Foyles Charing Cross Road and the London Book Fair on 12 April. It will be on general sale in Waterstones and Amazon from 13 April.

Find out more about the Undiscovered Voices competition - https://www.undiscoveredvoices.com/