Interest in the Moon reached fever pitch in Preston as a celebratory event attracted large numbers to the University of Central Lancashire (UCLan).

A sell-out crowd of 450 astronomy fans, both young and old, attended the special occasion to mark the 50th Anniversary of the Moon Landing.

The science extravaganza combined fun and interactive exhibits with an incredible talk which allowed people to experience, or relive for those old enough to remember, the sights and times of 20 July 1969 when one of the greatest feats ever achieved by the human race was accomplished, as Neil Armstrong and Buzz Aldrin stepped on to the Moon.

At the centre of the evening was the sound and vision show ‘Rocket to the Moon’, in which UCLan’s Dr Kevin Bowman explained what it was like to live through those exciting times. He brought the race to the moon to life, allowing attendees to see the mighty Saturn V rocket and explained how they became an Apollo astronaut.

Dr Bowman, from UCLan’s Jeremiah Horrocks Institute (JHI), said: “Having grown up through the time of the Apollo moon landings I really wanted to give people a feel of just what an exciting time that was. It was great to see so many people coming to celebrate and find out more about the incredible moon landings.

“It was really nice to see people from all ages, from the very young to the very old sharing in this experience. It was quite humbling to see the emotional effect it had on so many of the audience. It is particularly encouraging to see so many young people getting excited and inspired by what people can achieve with mathematics and science. Who knows, but maybe the first person to land on Mars, was at the event. Now wouldn’t that be great!”

"Having grown up through the time of the Apollo moon landings I really wanted to give people a feel of just what an exciting time that was."

Visitors were able to observe the Moon using telescopes, with expert guidance at hand; they were able to view the largest paper model of the Apollo-Saturn V in the world, the huge 1/24 scale paper model which is over 5 metres tall when stacked; and they tried their hand at a computer simulation landing on the moon using the same method as used on the Apollo missions.

Professor Derek Ward-Thompson, Head of the Head of School of Physical Sciences and Computing, added: “The Apollo 11 Moon Landing was the greatest technical achievement in the history of the human race. It generated world-wide interest and inspired a whole generation of scientists, myself included.

“The JHI is celebrating the 50th year since this event with a series of public events, including the Museum of the Moon exhibition in the Harris Museum in February, which attracted more than 50,000 visitors, and this public talk and exhibition, delivered by JHI maths lecturer, Dr Kevin Bowman. It is clear that there is still a huge public appetite for learning more about the Apollo missions, because this was the largest audience we’ve ever had for a JHI Public Lecture.”

A Flickr gallery of images from the event is available to view online. 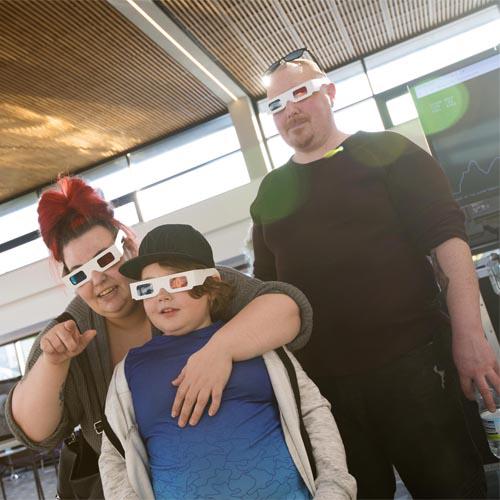 Lucas Pyne and his parents enjoying the 3D experience