Judging a book by the cover

2016 marks the 10-year anniversary of launching the Design Award, which provides an opportunity for art or design students to experience real cover design briefs first-hand. The winner for each of the three categories; Adult Fiction, Adult Non-Fiction and Children’s, each receives a work placement within the Penguin Random House UK design studios, as well as a £1,000 cash prize.

"I picked out words from the language I thought related to the themes in the book and illustrated this on the cover using my own typographic style which I tried to relate to the dystopian future setting of the book."

Commenting on his design Zack said: “With my cover, I decided to focus on the language famously used by Anthony Burgess in his novel. I picked out words from the language I thought related to the themes in the book and illustrated this on the cover using my own typographic style which I tried to relate to the dystopian future setting of the book. I then started to pick out details in the typography such as Alex’s face in orange and then also the name of the book in black.”

The judges were clearly impressed with Zack’s inspiring design. Alexandra Shulman, Editor-in-Chief, Vogue UK said: “I was immediately drawn to the clever idea of using the language as the only device on the cover.”

Joanna Prior, Managing Director, Penguin General Books added: “We loved how this brought Burgess’s remarkable language on to the front of the cover. It’s a clever, intellectual solution and that seems right for this book. Also a fantastic piece of design.”

Jim Stoddart, Art Director, Penguin Press said: “It’s so good to see a typographical solution, almost the only one submitted. I love the simple confidence of the design and typography.” 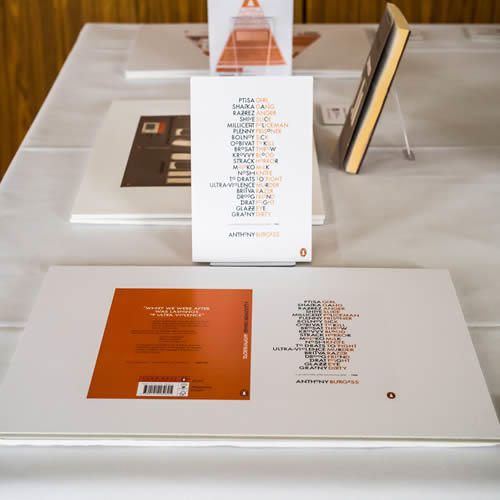 "It’s so good to see a typographical solution, almost the only one submitted. I love the simple confidence of the design and typography."

Since the launch of this competition, there have been 7,724 cover submissions by students from 130 UK and international universities. The work experience opportunity is a great way for students to hit the ground running in a working environment. Two entrants now work at Penguin Random House and there have been 17 winning students across the 3 categories. In 2016 the award had a record breaking of 1,639 entries.

Speaking at the London awards ceremony, Tom Weldon, Penguin Random UK’s CEO said: “The Design Award was first launched in 2007 as an opportunity for students on an art or design course to engage in design for publishing during their studies and to experience real jacket-design briefs first-hand.

“The award has gone from strength-to-strength and is now part of our creative responsibility strategy which we launched earlier this year. Other companies talk about corporate responsibility, while we talk about creative responsibility and this is incredibly important to us. Creative people imagine, they invent, they solve problems and they get things done. Unfortunately we don’t all have an equal opportunity to meet our creative potential and this has been identified as the creativity gap. The creativity gap exists because of inequality in the UK and it’s our missions to help close this gap. The Penguin Random House Design Award and our close working with Colleges to find and nurture emerging creative talent is just one of the ways we do this.”