A film created by a University of Central Lancashire (UCLan) student has been recognised as being one of the best in the country by the Royal Television Society (RTS).

The animation student from Rossendale will now go on to represent the north west at the RTS national final, a glittering awards ceremony held at London’s BFI Southbank.

‘Felix’, which Ashley describes as a “dark film with a twist” inspired by Frank Miller’s ‘Sin City’ graphic novels, is the story of an old man who is tormented by the local youths but seeks revenge on his neighbours following the death of his pet cat.

And another of Ashley’s films, ‘Unwelcome’, a first person view animation which makes the viewer the subject to give them a feeling of marginalisation, has been nominated for a Lancashire Arts Festival Award.

The accolades are even more impressive given that mature student Ashley, 31, is a dad to two young children aged seven and two, and juggles his studies around his part-time job.

He said: “Winning the RTS award was very unexpected but it feels really good to receive recognition. It’s nice to make my family proud.

“I’m pleased about my Lancashire Arts Festival nomination too, especially because the film covers such an important subject. I wanted to cover something that was going to hit home. Racism has always been relevant but with things like Brexit, the recent terror attacks and the unrest we’re experiencing, it needs addressing more than ever.

“The film tells the story of someone experiencing racism by putting the viewer in their shoes and giving them a real sense of what it feels like to be unwelcome.”

"Winning the RTS award was very unexpected but it feels really good to receive recognition. It’s nice to make my family proud."

Ashley admits that being a student, father and employee all at the same time was not without its challenges, but believes he’s in a much better position as a mature student.

He explained: “It isn’t the same for everyone, but I don’t think I was ready for University at 18. Now I have a set plan and goals and I know exactly what I want from my future.”

Ashley will graduate from UCLan with a BA (Hons) in Animation this summer and is already contacting animation studios to secure a graduate role, with a long-term ambition of making cartoons for a living.

‘Unwelcome’ is one of the final year projects being showcased at UCLan’s Preston campus from 9-16 June as part of the Lancashire Arts Festival Degree Show. 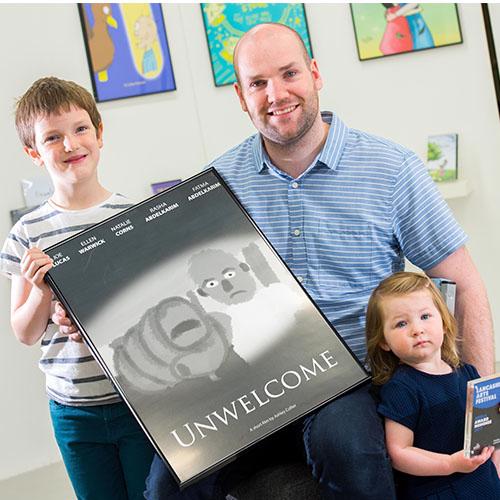