Archaeologists from the University of Central Lancashire (UCLan) have excavated a “genuinely bizarre” find of a woman buried with a cow.

The Anglo-Saxon grave was uncovered in Oakington, Cambridgeshire, by students from UCLan and Manchester Metropolitan University.

In the beginning it was thought the animal skeleton was a horse but they soon realised the discovery was actually a cow.

Co-director of the excavation, UCLan’s Dr Duncan Sayer, said: “This is incredibly early and impressive because there are 31 known horse burials from the UK, all men with spears, shields or a sword.

“This is incredibly early and impressive”

“As yet this is the only female burial and is symbolic of her status as a local or regional matriarch. It also shows the significance of the cow to the early medieval household economy.

“It would seem that after the end of the Roman period in AD 450 female, community leaders could command the respect of a region and be treated to elaborate funeral rituals.”

The skeleton was found with grave goods including brooches and hundreds of amber and decorated glass beads.

“She also had a complete chatelaine [keychain] set, which is an iron girdle and a symbol of her high status,” Dr Sayer said. 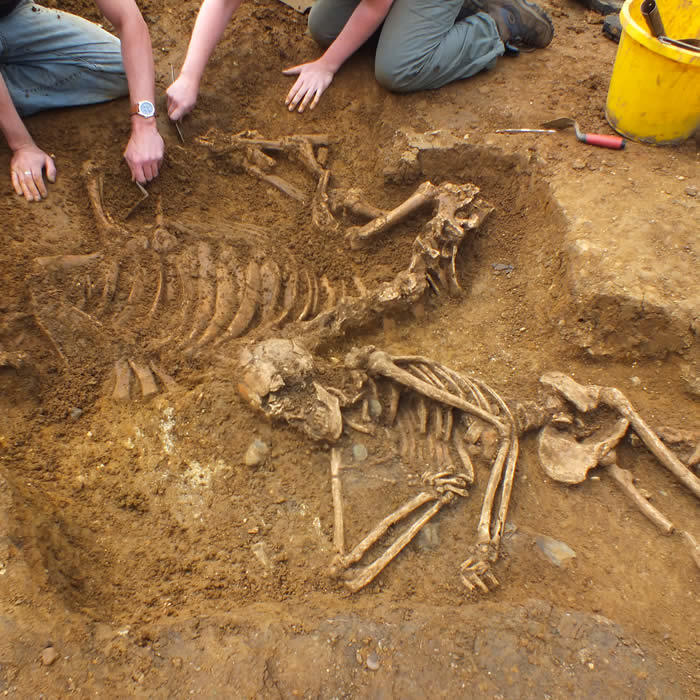 Student Jake Nuttall said: “Male warriors might be buried with horses, but a woman and a cow is new to us. We were excited when we thought we had a horse, but realising it was a cow made it even more bizarre.”

Joint director Dr Faye Simpson, from Manchester Metropolitan, said: “A cow is a big thing to give up. It's a source of food and something that would have been very expensive to keep, so to sacrifice it would be a big decision.

“They would have wanted to give her something really important to show respect and they wouldn't have done that for just anybody. That's why we don't find cows with burials.”

Dr Sayer added: “The cow burial is unique in Europe which makes this an incredibly exciting and important find. I don't think I'll find anything as significant as this again in my lifetime.”